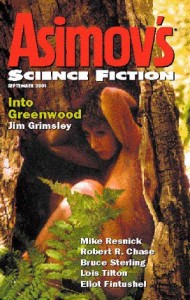 Fintushel has great fun, as does this reader, with a pleasantly mind-boggling and gently humourous take on love (of the female action variety), destiny and time itself. Well worth the read.

The water-surrounded forest of Greenwood is populated by sentient trees who have developed bizzare mutually symbiotic relationships with individual humans who genmod themselves to become almost as one with an individual tree.

The protagonist is seeking her brother Binam, who chose to become a sym as a child. Through him she finally makes contact with the groupmind of the forest and comes to an arrangement regarding their joint desire for freedom. In doing so, however, she reveals more about the nature of the tree/human symbiotic relationship than was known previously.

As appears to be de rigeur nowadays there is an (albeit minor) lesbian episode.

For me the story didn’t really manage to engage me with the characters, who were pretty much there to carry the plot and the concept along.

Written in the form of several diary entries written by Pan, an uplifted – whoops – an enhanced chimp. He is given a chance to leave the zoo in which he works, and to have an operation which will give him speech. The political faction which will pay for this operation wish him to take on a political role to support their agenda. But this role is at risk of being in conflict with the teachings of the simian sage who provides the moral leadership for the chimpanzees.

I’ve never been really keen on diary entry modes of story writing, and the story suffers for me in that it doesn’t really give (apart from a grooming episode) any really suggestion of the world of the chimp being any different. Not as much as, say, Pat Murphy’s ‘Rachel in Love’, but that is perhaps an unfair comparison.

Intensive farming and genetic modification lead to the development of a beast which can potentially be the answer to feeding the world’s starving. But there is a problem – one which causes the animals to be slightly less appealing as food.

A strange character in an asylum, boasts of having the potential to see into the futures. Is the game which he describes, similar to chess, really impacting on our lives?

Doesn’t really add much to the already comprehensive war is hell subgenre.

For me, other than the Fintushel story, a fairly average bunch. Mind you, the preview of the next issue is most impressive.