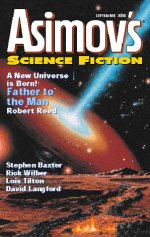 Father to the Man. Robert Reed.

The concluding chapter of a five-tale sequence, begun back in November 1993. The obvious problem with this kind of serialization is that without reading the preceding stories there is a danger that the current story will not stand up in its own right. This was very much the case for me, dramatically pitched in to a galaxy-spanning drama as precipitous as the wormhole through which the hero(?) Ord finds himself disgorged.

There was a bit of cognitive dissonance for me in a far-future setting which included very contemporary language (“You’re a stupid ugly tool of a turd!”) and the name of the Families being that of the bloke who shares my office at work.

The novella is a dizzying, pyrotechnic affair through which this reader felt somewhat bemused for the most part – a parallel to the closing sequence of Kubrick’s 2001: A Space Odyssey upon first viewing: visually impressive stuff and obviously important, but duh, what exactly is happening?! It will be interesting to see how the stories work collected together in the projected novel. Reed’s novella ‘Marrow’ was an excellent story a couple of years back and has been turned into a novel – whether the novel offers much more than the substantial novella is a moot point.

Another ‘story’ to perhaps bemuse some readers, although those (like me) who are familiar with usenet will not be disadvantaged.

Langford uses the usenet Frequently Asked Questions format to look at some of the history in SF behind basilisks – unthinkable information which can crack the mind (similar to the Monty Python sketch and the mortally funny joke).

A third story in the author’s ‘S’hudonni’ sequence (the previous two dating from ’88 and ’93.)

The S’hudonni earthophile Twoclicks appears in the story, slightly peripheral to the main character, Clifford Lamb, who arrives on the planet Caledonia as a feted poet, somewhat keen to keep his prior history to himself.

But Lamb is caught up in internal political feuding, and his past comes back to haunt, but also to help him.

Fifteen year old Minda finds herself in a very precarious situation on the planet Snowball, after crashlanding. She is slowly freezing to death, unable to contact anyone, until an alien life form makes contact.

The interaction between the two and the resolution of her situation give Minda a very personal perspective on the prospective strengths of the two races.

A short tale which proves that whilst money can’t buy love, but it can buy the next best thing.

In a remote rural part of the USA, an community live, cut off from the rest of the world due to their fear of the AIDS virus. The mere sight of blook is enough to send most members of the community into a funk, and as with sects such as the Jehovah’s Witnesses, otherwise routine medical problems can become major.

One boy decides to become a doctor in the community, against the wishes of some who see that as a role for women only. But he sees how much his hands will be tied, and how the obstinate and unfounded fears of the community will continue to have an effect.

Not a particularly strong issue. The Robert Reed novella will be a mystery to many I feel, and the other stories are good, without being standouts.