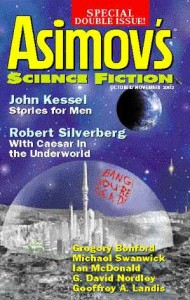 Robert Silverberg. With Caesar in the Underworld.

Over the past fifteen years Silverberg has been developing an alternate-world scenario in which the Hebrew exodus from Egypt under Moses never happened, and as a consequence, Roman remained pagan.

This is the latest installment.

This one wasn’t quite up to the same standard, to my mind. The first story was well-plotted and quite tight, whereas this one wanders about a bit unsure of itself.

The background: a domed lunar colony, with a matriarchal society – a sort of reversal of Victorian society: women in the breadwinning role, men a very much second-class citizen. Most men, cosseted and used for sex, are only too happy with their lot in life. A minority, the equivalent of the suffragettes, want more.

A young man is caught up in the rabble-rousing of an ‘alternative comic’, a somewhat cardboad cutout of a figure with a sense of theatre and the skills to match – the cover of the issue shows the slogan he dramatically renders on the dome (although the cover shows the slogan facing out, instead of in).

The dramatic ending is a bit of a let down, and the story ends with a bit of a whimper after the bang of the domal graffiti incident.

Nordley’s ‘The Forest Between the Worlds’ in Asimovs Feb 2000 was one of the more memorably different worlds to have appeared of late. In that story two planets are conjoined by a forest.

In this story of a truly alien world, strange amphibious creatures are living in an environment the exact nature of which remains a mystery as we see it only through their perception.

Their perception, and thus ours, is neatly inverted at one point, as in the shell within a shell in which they live up turns out to be down, and vice versa.

The alien culture is slightly jarred for me by names prefaced with titles such as ‘Professor Colonel’ and ‘General Councilor’, and references to them working in ‘offices’. But, this notwithstanding, a good bit of worldbuilding and narrative.

An intriguing, complex story which gradually unfolds and explains.

A far-future in which the galaxy has been settled by humans for tens of thousands of years. National concerns on a planet are heightened by the arrival of an ‘adnot’ from a far distant planet. Downloaded from the ‘adnot’ is an intelligence which is embedded into the body of a child – a singleton child on a planet where all births are twins. In charge of the child, young in chronological age, but with aeons-old memories which are gradually being relieved, is a young woman who is in both her employ and that of others.

The singleton child from a far planet and the woman who is far distant from her twin, are thrown together and must flee.

Geoffrey A. Landis. At Dourado.

Hard SF at its best – science and humanity blended together expertly. A station servicing ships toing and froing through wormholes is the setting. The main character, Cheena is a barmaid, and her lover is a sailor, whose ship is lost. The tale has been told countless times since man first took to the seas, but Landis gives it emotional resonance as the tricks played by the time distortions mean that even though her lover has died/will die, he returns to the bar for what is to be his final stopover. And she must not, can not, let him know his fate, in order to prevent any causal paradoxes.

Michael Swanwick. The Little Cat Laughed to See Such Sport.

In last year’s double-issue, Swanwick’s ‘The Dog Said Bow-Wow’ introduced us to Surplus and Darger, in a story that garnered rave reviews.

The two characters return, Surplus (a human/canine crossbreed) is not impressed when Darger takes a very close interest in the wife of a rich businessman they plan to fleece. For she is a feline/human crossbreed.

Whilst not quite up to the inventive level of the previous story, a diverting change.

A.M. Dellamonica. A Quiet Day at the Gallery.

A human visits a xeno-museum, with a mission to damage/defile one of the exhibits in order to influence politicking over artwork from Earth on ‘loan’ to the aliens. Things go badly wrong.

Earlier this year Benford dazzled with ‘Around the Curve of a Cosmos’ on SCI FICTION.

This is another rollercoaster, as we share the disorientation of one of the key scientists who has terraformed the moon. Brought back to ‘reality’, his AI/self is challenged by controlling interest of the moon going to a multinational, and he must fight for what he has created, and what he might lost (and that he has already lost). Top notch.

A strong issue. The two longer stories (Silverberg and Kessel) less satisfying than the Nordley, McDonald, Landis, Swanwick and Benford. Interestingly, the Kessel and Swanwick stories were, to my mind, a bit of a step down from the preceding stories by the authors.