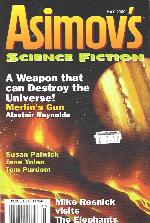 The latest technological developments in slowing the speed of laser light give Silverberg pause to reflect on Bob Shaw’s “The Light of Other Days”, the classic ‘slow glass’ story.

Accurately, and often painfully observed story of a young boy, living with his mother and older brother, in the emotional turmoil following his father’s death.

His elder brother has let his pet cat out of the yard, and the GPS shows the cat at the top of the nearby mountain, evidently frozen to death in the harsh winter. Michael has to wait several days for the weather to clear before he can go after Bobo, during which time a lot of things come into the open.

An excellent story, although the SF elements are minimal.

The Elephants on Neptune. Mike Resnick.

The intro to this story refers to Mike Resnick’s ‘chilling new tale’. Hmm, I found it rather amusing, almost a throwback to golden age SF in its feel.

Elephants are living on Neptune, and cautiously welcome the representatives of humanity. The men from Earth are somewhat bemused at meeting the elephants, who point out that the treatment that they had meted out by mankind over the centuries was somewhat unjust.

As the two sides parley over a few days, strange things happen. [spoiler]

Not really Alternate History, but puts a story into a historical event and real people, in this case the ill-fated trip to the Antartic by Scott.

The new twist on the tale is a simple one [spoiler] which has no basis in fact, and like much Alternate History is simply a case of picking a storyline or plot element or personal characteristic and imposing it on a well-known situation. If this story had been written about any Antartic expedition you would have a so-so tale of the eldritch horrors not dissimilar to many such stories.

I would also raise a concern here about the people involved – surely there are people alive for whom the characters in the story are not-too-distant relatives? I’m sure I wouldn’t want someone writing such guff about my grand-father or great-grandfather!

A short story about ‘talking head’ war correspondent on TV with a fairly simply, and fairly silly, central conceit [spoiler]

I will press on…

Now this is more like it! Some good solid SF to get your teeth into.

After escaping the Huskers Merlin uses some stolen equipment to attempt to join the Waynet, which offers the potential for FTL travel, at which point the story ends.

Merlin’s Gun rejoins Merlin a long, long time in the future, as he seeks to find the ultimate weapon with which to defend humanity.

Reed compares and contrasts the godlike role in computer simulation games with real-life, with the protagonist struggling to develop his virtual worshippers, whilst maintaining his ‘real life’. He comes across as a pretty unpleasant character in both worlds!

The Noise of Their Joye. Tom Purdom.

A time travel tale, in which Bach (makes a change from Shakespeare I suppose) is visited by a crack team of time travellers who aim to record details of some of his works which have been lost in the mists of time.

For a hand-picked time travel team they make life spectacularly difficult for themselves, including one who blurts out the plot to Bach. However, they have drugs which can cause memory loss (handy thing to have) through which they can undo any problems.

At one point a character refers to a science fiction time travel story, which is something I prefer not to see – it rather loses the suspension of disbelief for me.

It doesn’t really add much to the substantial time travel literature.

Not a classic issue by any means. If it wasn’t for the Reynold’s story then IMHO it would have been a poor issue.