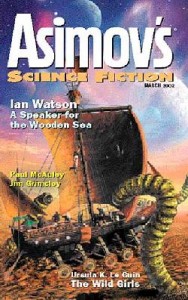 I’ve been reading e-versions of Asimovs for some months now, but went back to the dead-tree version for this issue. Issues over the e-version for me are

Not a classic from UKLG – certainly a notch or two below the inventive ‘The Birthday of the World’ from a year or two back. As you would expect, a well-realised fantasy setting. What feels like the ‘usual’ UKLG naming conventions are in place (Bela ten Belen), and without quite hitting the heights, the story moves fluidly from the harsh kidnapping of a group of peasant girls.

In the society described, men marry captured slave girls, and it is to this end that two sisters are raised in luxury. However, the ghost of one child killed during the original kidnap haunts the couple, and the wedding bed of the younger girl becomes her death bed as the murderer of the dead girl has revenge wreaked upon him.

The story is a tad sketchy, describing a lot of detail rather than it becoming evident through dialogue or action, and there are two episode (the kidnap, and the denoument) separated by several years.

An interesting concept underpins the story – a spaceship orbiting a black hole is able to operate on a relatavistic time frame. The ship is occupied by corporations whose CEO’s are able to direct their operations elsewhere in the universe, which take place as a vastly greater speed. The result is in effect like playing computer games like ‘Sim-City’ as years pass in moments.

Sloan Lerner is a young CEO who finds himself facing a tricky problem as a rival CEO looks like he may get a march on him with regard to the rights of a potentially lucrative planet. There is a slight, unnecessary!, flaw in the story as Lerner takes a short stroll without his ‘phone’. In an environment where seconds equate to years in the external time-frame someone like Lerner would *never* be without his ‘phone’. (And a further question begs – what happens when Lerner sleeps and centuries roll by?)

The story (a shortish one) moves to those in ‘real-time’ who are trying to do things by the operations manual (the nature of the link with the CEO means that creativity and innovation are sacrificed by the need to do things by the book). As the two companies go head to head in combat, can a mutually beneficial resolution be found outside the procedure manual?

An entertaining story with a refreshingly different concept behind it, although IMHO it could have benefitted from having more work put into it?

Wrecking crews are harvesting metals and other resources from a space junkyard of ships, many crippled following the ‘Quiet War’. Humanity is contained within the solar system, and whilst their is post-humanity in the form of genmod humans, there is still greed and aggression and injustice.

The foreperson of wrecking gang #3, Maris Delgado, is struggling to get her small team of ne’er do wells to keep on schedule with a small shuttle which they are stripping. Her team are concerned that there are some pieces of kit missing, and one body unaccounted for. She is keen to brush aside their concerns in order to avoid financial penalties for finishing the job late.

However, the missing body is found, although the body is far from dead and is in fact a genmod human developed by one of the leading scientists in the losing faction of the recent war. As this find comes to the attention of those higher up in the corporation a struggle over the young girl and her precious cargo takes place.

Neube also posits a post-war near-space scenario, where the captain of a city-sized ship has to struggle following an attempt on her life with the ongoing difficulties of helping the people who rely on her and the charity from others, to survive.

Some small, very human issues are used to highlight the potential dehumanizing aspects of our future.

Getting the News. Jim Grimsley.

An asteroid orbiting a planet held by the race with which humanity is at war, The Hormling, contains more than just rock. A maintenance robot and an AI with a biological component, silently watch the enemy, beaming back information to us.

The Hormling are strange, small creatures whose lives are over in a matter of days. The race seems to also live at an accelerated pace, and internecine rivalry appears to be the cause of the rapid collapse of this threat to humanity.

The story is told from the perspective on the AI, who has vague suggestions of memories of a life prior to the one she has which has started and will end in the silicate tomb.

A Speaker for the Wooden Sea. Ian Watson.

The mini-introduction refers to Watson as having had a hand in writing Spielberg’s ‘AI’. Talk about damning with faint praise – Watson (no relation!) is one of the most impressive British writers, and has turned in some classic short SF and novels over a quarter of a century. Recently appearing in F&SF (Oct/Nov 2001) with the excellent ‘One of Her Paths’).

I referred to this story earlier as fantasy, which it isn’t really. It features some vivid world-building on a quite fantastical premise. The planet, Wormwood, is virtually covered by wood. Not in the shape of Brian Aldiss’ ‘Hothouse’, but a smooth surface of wood. Smooth yes, still no. Parts of the surface are sea, and the wooden sea has waves and sea-monsters and wrecks and typhoons.

The main character is an off-worlder, who sees the chance to use the leaves from the planet to create and make popular once again the poetic drink Absinthe. The opportunist finds himself getting closer to the community than he likes, but on a voyage into/onto the wooden sea, his AI comes into contact with another, larger, very unexpected intelligence.

Linked inextricably to the planet, the status of Speaker for the Wooden Sea is given to him, and he faces a long (very long) life amongst the clean living populace. However…

One of the best issues for a while, for me, with all stories innovative and well-written. Watson and McAuley show that along with Alastair Reynolds, Charles Stross and Ian R. MacLeod (a forthcoming Asimovs story in the setting of this ‘Isabel of the Fall’ from Interzone #169 is due in Asimovs soon and I am waiting with bated breath!) the British are playing their part in providing some high quality short SF.