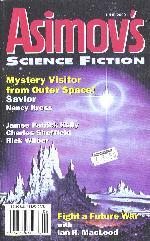 Jim Kelly takes us to a near-future in which the web/movie industries provide a chance to engage interactively with a range of movie stars.

Dylan McDonough is struggling with his Starscape firm, running perilously close to bankruptcy and failure, in an industry where popularity is measured by the ‘zaz’.

A bio-enhanced girl, Downs Syndrome by birth, offers him a long-shot chance at getting his hands on a ‘webster’. It’s a rollercoaster, celebrity-studded ride thereon in.

Stephen to Cora to Joe, or, The Trust As I Know It, or, Shifty Paradigms: the use of literary icons and sports motifs in specultative fiction. Rick Wilber.

A title to remember – or at least, one to misquote in future years!

An intriguing story, which shifts and changes as the events unfold. To go into too much detail would spoil the reading of this baseball-related story, but suffice to say that the Stephen in the title is one Stephen Crane.

After two clever, and well-titled stories, one that is neither. Was humanity beaten to the Moon?

A very powerful story with a misleading title. A soldier (he remains Soldier throughout) returns home after combat in Europe – he was a EU ‘peace-keeper’ whose role rapidly escalated. The country he returns to is quite different to that he left, reeling from the economic impact, and his relationship with his wife and son needs rebuilding against that shattered background and the shattering impact on him of his experiences.

The Art of Fugue. Charless Sheffield.

A short, well-wrought working of a not hugely original storyline. Ches Tauper hears some music, which haunts him, and he goes to beyond the ends of the Earth to find out who composed that music.

Shades of Arthur C Clarke’s The Sentinel and James Tiptree Jr’s The Man Who Walked Home.

An enigmatic extra-terrestrial object lands on Earth, and appears to do nothing. Surrounded by an irresistable and impenetrable force, its purpose remains a mystery for many years. A subsequent global catastrophe leaves humanity struggling to return to civilization.

The story moves in generational strides to a time when humanity is sufficiently far advances for the object to take notice. But..

With the exception of the Terrible Lizards of Luna, a particularly strong issue.