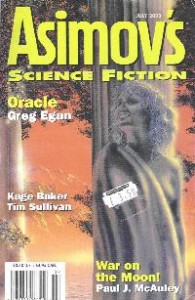 The Great Winter has forced humanity from then now-frozen Earth. The moon colonies have degenerated into warring factions, with youngsters groomed into drug-crazed soldiery.

McAuley sets off on what is initially a fast-paced army scenario, with a tech forced by his more gung-ho brother into a mission which does not bode well. However, the mission puts him into an altogether different situation, faced with monolothic evidence of past races.

One of Baker’s Company series. Facilitator Van Drouten, living in Amsterdam some centuries past, is visited by Kalugin and the precocious Latif.

The introduction mentions that the story series has been optioned for film/TV development which will at best see a Time Tunnel/Quantum Leap-type series. The Zeus Incorporated idea is quite interesting, but there is a limit to how much can be made of it without it losing its freshness.

Not the most catchy title, but then again whenever you read the title of the story you can think: ‘Ah, that’t the story about the guy with an orbital salvage and satellite repair company who finds himself witnessing a devastating alien attack on the colonies on Venus who manages to single-handedly save total annhilation.

The author makes a lot of the fact that the main character is facing certain death from radiation poisoning, but then totally chickens out at the end of the story with a handy medikit hoving into view ready for salvage and utilisation.

The Great Economy of the Saurian Mode. Michaelene Pendleton.

What is it with the clumsy titles in this issue?

Sonia Vasilyeva has the right combination of pheromones and emotional stablity to run a competition team of Sorsh raptors.

A government agent offers her and her team a big reward to hunt down an escaped terrorist – the biggest reward being passports which will enable them to get away from Earth.

Sonia smells a rat, and as the hunt for the escapee unfolds, her suspicions increase. The denouement sees the government agent making a Big Error of Judgement (so big you wonder how he got any degree of seniority in the government agency).

Hawk on a flagpole. Tim Sullivan.

But Sullivan leaves his story short and questions unanswered, as opposed to writing 800+ words a la TommyKnockers.

An interesting (at times fascinating, at times slighly long-winded) Alternate History(ies). Robert Stoney is imprisoned by the forces of the law, by reason of his homosexuality, a most criminal offence in the England of the inter-war years of the 20th century, tormented by the evil policeman Quint, who has the scientist imprisoned in a very small cage.

A mysterious visitor frees Stoney and …. well, as the story is online here – why not read it yourself.

Albeit at times a bit heavy on the descriptions of quantum physics, still an excellent and complex story which is even more rewarding once you spot where the links to real life people begin to surface.

The McAuley and Egan stories start and finish this issue, and are the strongest IMHO. Baker’s Company stories I find vary in the extent to which I enjoy them – this one really does feel like an episode of Quantum Leap. Jarpe and Pendleton are not-bad/good, and the Sullivan is a good on the basis of the author leaving out material rather than putting material in.