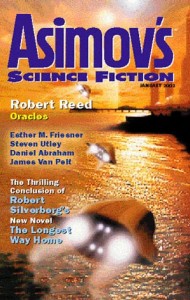 One of the reasons why I started summarising short SF stories I had read in the first place was that I don’t have much of a memory with regard to who wrote what and what a particular story is about. And I will doubtless be checking back from time to time to refresh my memory when I get confused between Greg Egan’s ‘Oracle’ from last year, and Robert Reed’s ‘Oracles’!

Reed’s story isn’t quite up there with Egan’s, but is still a good yarn.

A mid-list SF writer attending a Con starts the story off inauspiciously IMHO, but the story soon takes off as the plot and background gradually unfold. Jack Rheingold’s career as a SF writer was somewhat cut short by First Contact with *real* aliens, but he struck lucky when he was picked up by the media as having some insight into the alien condition. This then led to a highly sought after position on the Committee which acts as a buffer between humanity and the huge amount of data and technology which is being supplied to us.

The contact with the exta-terrestrial species is by radio signal, and the technologies delivered by one race enable humanity to make a colossal leap. However, not everyone on Earth is happy with the censorship and filtering which the Committee are responsible for, and Jack finds himself teetering (literally) at a precipice as he has to make a judgment as to whether to support a coup.

An interesting idead – Crime is deterred, particularly recidivism, by a technological implant which quite literally acts as an angel sitting on the shoulder of a wrong-doer. Whenever evil thoughts are thunk the voice whispers in the miscreants’ ear, warning of the inevitable consequences.

The violent wrongdoer in the story, Mason, is recently out of jail, and manages to avoid wreaking revenge on the ex-friend who has been keeping his lover ‘occupied’ during Mason’s incarceration. But Mason does not heed the warning voice with regard to Jenny, who he tracks down.

For me the ending left a very bitter taste in my mouth – Mason gives Jenny a violent beating, aware that it will be a most final undoing for him, on the basis that she has to learn to stand up for herself. And this she eventually does. But I’m not entirely convinced that the end justifies the means in this story.

The Safety of the Herd. James van Pelt.

van Pelt paints a vivid picture of an overcrowded city, an updated ‘Billenium’ if you like. A cop is despatched to a scientific facility where a scientist is holed up, threating suicide and brandishing something potentially biologically unpleasant. The scientist has been engaged with GM experiments on animals, and is particularly interested in the reaction to being in close proximity in various animals – snakes are quite happy to be crammed together, rats not.

And it appears she has found a solution to the stresses caused by population density.

Another in Utley’s series of ‘Silurian Tales’. Regular readers will be familiar with the ‘time travelling’ scientific visits to pre-prehistoric Earth. This short story takes us back to the very first visits, and is a very brief episode of no real import – a small section of a book chapter, in effect.

An elderly WWII vet is seeing out his final days in a physically frail condition, enjoying visitations from dead GI comrades, with whom he continues to banter even after 50 years.

He finds himself faced with brutality once more as his personal carer upsets her boyfriend by staying on duty late. The unpleasant character turns up and proceeds to give her a sound thrashing which threatens to become terminal. The vet is physically unable to help, until, that is, he passes over to the other side, and is able to energise the victim to fight back.

The story is excellent – but again a small quibble: two stories with violent attacks on women by their partner is at least one too many for one magazine issue!

Even excluding the novel serialisation, a good collection of stories, with Friesner getting my nod for the pick of the bunch.