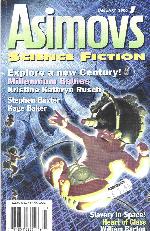 On top form, Rusch describes painfully one of the adults who was conceived by parents wishing to have the status of the first born child of the new millennium. Brooke is long estranged from her mother, a dysfunctional scientist trying to come to terms with herself as an individual as opposed to a competition entry.

A research study is using the large number of millennium children as a cohort to assess differences between those who were ‘successful’ as millennium babies (born soon after the turn of the millennium) and those who were ‘unsuccessful’ (born too early/late). The story examines whether destiny or pre-determination is a major factor in the lives of the children, now adults, being studies.

Vasili Vasilievith Kalugin of the Company returns (according to the introduction – I’m not sure which story to which this refers). One of the time travelling cyborgs who scour the past (including our present) to rescue works of art prior to destruction, Kalugin finds himself stranded in a microsub on the bottom of the ocean next to an underwater volcano (the black smoker of the title).

The story is told most in the form of a monologue, which Kalugin describing the events leading up to his present predicament. This is very well handled, and the story compelling.

The True Story of Professor Trabuc and His Remarkable Voyages Aboard the Sonde-Ballon de la Mentalite. Jim Cowan.

Excellent stuff. Professor Trabuc has discovered/uncovered the Mindscape, a means by which all things which are possible and have been possible and may be possible can be opened up to the human mind through the power of thought. Trabuc invites the recently bereaved storyteller on board the wooden and brass dirigible to explore the strange worlds that are thus open to them.

The paintings and life of van Gogh are intertwined, vividly giving the story a 19thC pastoral feel to which Trabuc is drawn.

Aliens have arrived on Earth and are living in a reservation/government complex. Nearby some good ol’ boys and their families are vacationing. Young Tap and her brothers decide to seek out the aliens, and find that their contact opens up insights for them – and, as you might expect, those insights are not necessarily a benefit.

A deeply disturbing, dark tale. Eltanin is an optimod, a genetically engineered humanlike being. His like are used by mankind as cheap labour, and he travels between the stars as a pilot and sole crew member of a cargoship. On this voyage, however, he finds a most unusual cargo in the crates of his ship.

Bestial/human urges bred into his genmod being, normally sated by another sub-human strain (allomorphs), are thus able to be sated, and sated again and again, during the voyage.

Mankind it seems, has plunged deeper into an amoral abyss in creating yet another cheaper form of labour.

But amongst all the cold brutality there flickers, against the odds, a small flame of hope for humanity.

A standout issue, with the four longer stories (Barton, Rusch, Baker, Cowan) particularly strong, somewhat overshadowing the two shorter stories (Baxter, Piecynzski). Only one problem with starting a new year with such a strong collection: living up to that standard. Expect to see this issue putting forward a number of nominees and Years Best entries.