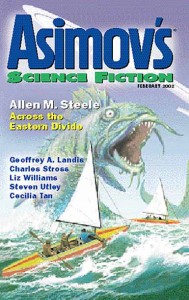 I’ve been reading Asimov’s in two formats over the past couple of years: the traditional dead-tree pulp sized magazine, and an e-version produced by PeanutPress (now Palm Digital Media), which I read on a Cassiopeia palm-top/PDA.

The Cassiopeia version was extremely handy – several issues of magazines could be kept alongside a number of novels on a hand-held device which also ran Word, Excel, Doom (!) and more. The main disadvantage was the very small size of the screen.

As of a couple of months ago there has been another e-version available. FictionWise, who have been selling an increasing number of short stories and novellas in a wide range of formats have now added Asimovs/Analog/F&SF to their product range.

FictionWise make their e-content available in several formats, and having purchased a story or magazine, you can choose to download in several formats. The one I chose for this review was a PDF version, which enabled me to read the magazine on my home PC and my laptop. The PDF version works well, with a reasonable amount of text per screen. The small screen of the Cassiopeia, in contrast, means that pages tend to consist of one or two paragraphs at most. The picture below shows how much text appears per PDF page – the fuzziness is due to the screen capture : the crispness of the text on screen is fine.

Obviously it is a trade-off – a hand-held device enables to you read on the train, tube, bus and other locations where taking out and booting up a laptop would not be advised!

Another in the author’s Coyote sequence. The first in the series, Stealing Alabama (now available, free of charge, for a while, on FictionWise) was a standout and is a current Nebula Preliminary Ballot title.

In this latest installment, we follow several young people, children of adults who appeared in previous stories, embarking upon an adventure doomed to disaster. Full of youthful enthusiasm, they head off in sailboats to explore the alien world which the small colony of settlers is beginning to establish itself upon.

And, as is flagged up in the initial paragraphs, one of the group meets their death. Another comes to terms with her pregnancy, and one of the putative fathers heads off into the wilderness to find himself (there is a suggestion that his story will be told later).

I haven’t particularly engaged with this series after the first installment. What we have here is largely an adventure story with a group of young people heading off on an ill-fated voyage. This kind of thing has been done before, and done much better. The sfnal elements aren’t there to any extent and are dismissed when the plot suits it (the shuttles are taken out of action by the adventurers to stop them being picked up quickly after absconding), then appear when helpful (a sat phone is dug out of a backpack when things have gone pear-shaped and rescue is needed).

To my mind Steele could spend the rest of his life (like the ill-fated character in a previous story) writing ad infinitum about the Coyote. A fix-up novel is promised. My preference/recommendation would be for a novelisation of the first episode!

An interesting departure for Asimovs, as this is essentially a supernatural/horror story. The main protagonist finds herself, following her mother’s death, more attuned to the suffering which went on the family house over many years. It would appear she is a ‘doleurvoyant’ – someone who can sense the psychic residue left over from traumatic events.

All very X-Filesy. I can forgive Asimovs in this case, as an exception to the rule, and as it is well written.

The Long Chase. Geoffrey A. Landis

British writer Williams’s novel ‘The Ghost Sister’ from 2001 provides the background to this tale. We are treated to two perspectives. One its the traditional human anthropologist, Daniel Ottrey, who believes that the very act of observation impinges upon the behaviour being studied. The other perspective is one of the native aliens, who quite clearly proves the fatal flaw in this scientific paradigm.

As Daniel attempts to study, and then communicate with the natives, their total lack of interest in him is galling at first, then becomes more dangerous when it threatens his very existence.

Yet another in the author’s Silurian tales sequence. As has happened in other recent stories in this series, the quantum nature of the universe proves problematic for one scientist, who finds upon return to Earth that things are not quite what they were before. It is fairly clear from an early point in the story as to what the twist is to be, and with other stories having covered the same ground, my question is – why?

A strong issue, giving as wide a range of SF stories as you could ask for. The PDF format on laptop/PC worked fine, but lack of portability meant it took longer to read this issue than it would have taken in dead-tree or PeanutPress format.