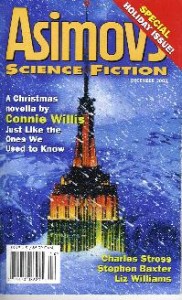 I missed this when it first hit the shelves, so a mini-review some months after the event.

Connie Willis. Just Like the Ones We Used To Know.

The Christmas Special leads of with a story about an exceptionally heavy snowfall across the whole of the US of A. And, erm, that’s about it.

John Alfred Taylor. Way out on the Regolith.

The elderly Helen from ‘The Men on the Moon’ (May 2001), again look back at the early days of settlement on the Moon, and the excitement and danger that was there to be had.

An alien spaceship crashlands in the mountains, and a survivor is taken to a nearby hospital, where they try to do the best they can for him/her/it with mostly guesswork. However, is survival actually going to be in its best interests?

I read this in the Haber/Strahan Best of 2003, and wrote

..a story from one of (Baxter’s? ever-increasing sequences – the XeeLee sequence. In said sequence of stories, spanning a huge volume of space and time, humanity is fighting for its corner of the universe. The galactice scope of the battles are put in context by Baxter through very human dilemmas, and here is a case in question. A young ensign finds herself face to face with her future self, through a time paradox. Humanity has been successful in using intelligence from battles yet to be fought to help them with their military strategy. However, the future captain has committed a reckless act, and decisions have to be made as to whether the future from which she has returned is one that can be allowed to happen.

Liz Williams. Tycho and the Stargazer.

Williams provides a history lesson, using Johannes Kepler, through an early period in his life, when the German astronomer is a guest of one Tycho Brahe, the mathematician at the court of Emperor Rudolph II.

British writer Stross begins to bring to a conclusion the story sequence started with ‘Lobsters’, with this, the seventh story (out of nine), in which Manfred makes a virtual re-appearance.

A strong collection of SF, with Williams providing a fantasy alternative, and Willis a seasonal tale that didn’t do much for me.