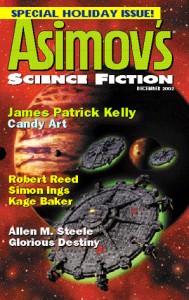 Asimov’s ‘Special Holiday Issue’ – presumably referring to Thankgsiving, on the basis of the dates it was available on the newstands.

Ings has built up a name for himself with stories in Interzone and elsewhere, which are invariably thoughtful and ‘different’.

This is not exception. He addresses some philosophical and moral issues around science, in particulary its links to business and to financing of research. And to the nature of wealth, and money, and its effect on people.

Professor Sylvia Florianopolis is a scientist who has created the ability to sense that which it is not normally possible to sense – in the case of the protagonist, Graeme, he has the ability to ‘see’ money. Such a talent is of interest to those in business, in particular Conor McVaugh, a multi-billionaire, who has everything, but in the end, feels he has nothing.

The story unsettles, as it jumps between viewpoints, somewhat disorientingly, and left this ready somewhat perplexed at the end. I’ll probably sit down and read it again at some point soon.

A short festive tale in which a woman is finding her life somewhat cramped by her two parents, who are sharing time as AI constructs in a smaller than lifesize puppet, and a candy-confectioner boyfriend unwilling to commit to the relationship.

One the dark side of the moon, a message is finally received from another intelligent lifeform. An aeons-old message from a dead race, but still another intelligent race. Their message is lengthy, but, ultimately offers little joy to humanity. The small team who have received the message have a moral dilemma – to tell the rest of the world, or to keep quiet?

The first published story by Allison, and an interesting one. A rogue AI has created a strange environment in which a scientist sent to unplug him is kept captive, sweeping leaves in a forest, with the AI playing psychological games with him.

A train journey in which a young girl ‘meets’ a strange boy with very strange parents. The boys is reaching an age when he fears that his parents will tire of him and he will cease to be a novelty. And when the novelty wear off things, his parents tend to have no use for those things…

The final installment in this novel, which started off so well IMHO with ‘Stealing Alabama’, but went downhill thereafter. For those who like the series, no doubt they will be pleased to read that a second novel serialisation is due in Asimovs. (To my mind, Steele must have some negatives or other incriminating evidence….)

I did read this story, and can report that it read, to me, like an SF story written by someone who doesn’t normally write SF. The major plot twist is that the colonists are visited by another colony ship from Earth, but one built much more recently, and whose journey was much shorter due to advances in their means of propulsion.

The crew of this new ship include a post-human, a human intelligence uploaded into a cyborg. The captain of the ship doesn’t speak English well, as that has lapsed as the main language of the US of A (evidently their technology can handle uploading human intelligences, but can’t give any kind of crash tuition in languages). The new advanced ship is extremely low on supplies (duh) and is relying on the existing colony.

Issues from earlier in the story sequence are resolved (fairly clunkily), and the whole shebang ends with the existing colony heading off into the wilderness.

This really didn’t push any buttons of mine whatsoever, apart from my Wince-ometer, which flashed red several times (especially at the ridiculously contrived situation in which the daughter of one of the crew ‘loyal’ to the original fascist regime on Earth finds out about his death). And there are undertones in the story, regarding a group of Americans going back to frontier-spirit basics and resisting external change and that which is new and different, which feels quite retro – almost a conservative, reactionary response to 9/11. It feels like it could be re-written quite easily as an episode of Bonanza, The High Chapparal, or Star Trek TOS.

Ings, Reed and Allison provide some interesting, enjoyable and at times rewarding reading. Kelly and Baker provide short stories that are fine as far as they go, but they don’t go anywhere particularly. The Steele serialisation continues to baffle me.