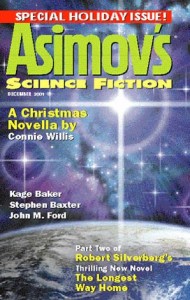 A special holiday issue, complete with Christmassy novella from Connie Willis! Hmmm – but the magazine came out in late October and there is already another issue available!

The festive fun and frivolity comes from a near future party arranger, Linny. She is fully tooled-up net-wise, able to offer even the most fussy client the themed party of their dreams.

Whilst dealing with one particularly awkward customer who is forever changing her mind, Linny takes on a slightly unusual client. The elderly lady considers a *lot* of Linny’s 3-d holo displays, and also seems intent on matching up her grandson with her.

But are there further ulterior motives?

A nicely told story, although to my mind slightly over-lengthy, and the many, many descriptions of options in Linny’s catalogue became a little bit OTT by the end of the story.

An intriguing story in which a sword with unworldly powers traces its roots from the days of the American civil wary through US historical events to the current day.

Baxter provides a ‘side-bar’ to latest ‘Manifold 3: Origin’ novel. The conceit is that there are numerous quantum Earths (a currently ‘hot’ topic). Baxter proposes a mysterious ‘red moon’ which travels between alterante realities, under the control of an elder species.

As in his novel, there is a link between our Earth and one in which a hominid race became ascendant. Mary, a homo sapiens, has been stranded on an Earth with a major axial tilt, generating months long winters and months long baking hot summers. She is stranded having returned a group of hominids to this strange earth, her transportation having been damaged beyond repair upon landing. This main character is evidently featured in the Manifold series and consequently the enjoyment of this story will be the more for those of you familiar with the novels.

Another in the ‘Company’ series, in which far future cyborgs visit the Earth for various purposes, under the employ of Dr. Zeus Inc.

The main character from ‘Son Observe The Time’ is featured, and he has the not enviable tasks of working with a mortal family who are very much mortal. And not only is he aware of their demise and the nature of it, but the young son, the first genmod child, is also aware of his imminent death.

As in the previous story there is a twist in the tale. I have to own up to not enjoying many in this series of stories, and this is one that was a definite miss. I didn’t really engage with the characters, and the main character himself was very much going through the motions, and the plot element of the young child facing his own death was handled without that much emotion – very much a case of characters being moved around to progress the plot.

In the Days of the Comet. John M. Ford.

A reprint from Nature 22.6.2000. A short conjecture on post-organic prion-based life.

The third installment in a novelisation. Or, if current standards for novels are anything to by, the second part of a very long novella.

A slightly flat issue for me – maybe it should be read in the last week of December in an armchair by a blazing log fire, with a glass of port in one hand.