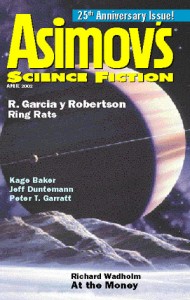 Richard Wadholm. At the Money.

I was looking forward to this hugely. A ‘companion piece’ to “Green Tea” from a couple of years back, which I greatly enjoyed, as I did “From Here You Can See the Sunquists”.

However, I have to admit to being a tad disappointed, as this didn’t really reach those heights. Some complex commodities trading shenanigens somewhat obfuscates the plot. As in “Green Tea” the use of near-light speed ships to transform base metals and chemicals into higher value states is the underlying science, and the wreck of one ship and the death of the crew offer a chance for the unscrupulous to make lots of money – provide they gamble right.

Of course, justice is seen to be done, finally (although not unequivocally). For me rather too much attention was placed on the trading and the science, at the expense of what was an interesting although relatively underdone human element.

Peter J. Garratt. When the Night is Cold (and the Land is Dark).

British writer Garratt takes us back to Arthurian times (as he did in Interzone last year), which a young female understudy to Merlin has to find the answer to the earth-encircling cloud which is causing famine.

This is no Disney court of Camelot – it is a dirty, coarse and elemental world, through which the young woman has to make her way. An interesting story, achieving a mystical feel without any cod-fantasy elements.

An intriguing story. It is over a quarter of a millenia since the ‘Origen’ landed on a planet, and the settlers are split into two camps – those who wish to attempt to repair the ship, and those who are happy in their subsistence farming life.

The planet has curious alien artefacts, which enable those with the skills to beat out commands as if drumming – producing from the artefacts tools and other equipment. There is a competition between steam driven trains : one wholly artefact-built, the other built by natural elements.

The story manages to portray an unsettling alienness, which isn’t, until you realise such, altogether that common in SF!

Another ‘The Company’ story. This time quite a short one, in which more about the said cyborg/time-travelling company is revealed, this time through a recuperating operative and a somewhat less advanced hominid.

Not one of RGyR’s more thoughtful pieces. A brutal space pirate kidnapping in which two young women manage to outwit the cruel enemy. The massacring of crew is told with rather too much relish for me!

One minor point – in the first page and a half one of the characters shows neither ‘an angstrom of doubt’ nor, some paragraphs later, a ‘scintilla of doubt’, which is somewhat sloppy writing!

A bit of a let down after last month’s corking issue! You can purchase this issue in e-format at Fictionwise.