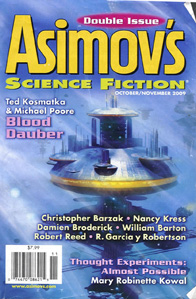 Bell works at the zoo, lives with his wife in a trailer, trying to make sense of the animals nominally in his charge and their behaviour, and the behaviour of his fellow workers, and his wife’s behaviour, and his own behaviour.

Whilst he has pretty much come to an understanding with the animals in the zoo, everything else is another matter, and when he gets embroiled with one of his female colleagues, and someone working a community service order, who has a whole heap of issues himself, it gets even more complicated.

His attempts to understand these various behaviours and responses to stimuli and changes to the environment is thrown into relief by a very, very strange insect that he comes across, and which has a very rapid response to its environment.

Its a well-observed story full of complicated, three-dimensional characters.

Heather Lindsey. Where the Time Goes.

Gently entertaining yarn about a couple who are trying to earn a living by stepping through time to collect those snippets of time we all waste, find themselves having to sup with the devil to pay the bills.

Rod Garcia’s recent homage to ERB was a so-so for me, but clearly a yes-yes for editor Williams, who is happy to furnish a second installment. Like the Barsoomiam tales which ERB turned out a dozen of in amongst his Tarzan tales, and Venusian tales, and countless other tales, this story features SinBad in the company of various buxom (no, let’s not mince words, shaggable) beauties, with danger and derring-do the order of the day.

I skimmed through without getting a sense of really missing much. In contrast to…

A substantial story by Broderick, requiring a lot of attention throughout. It rewards the attention, providing a complex background to a fare future posthuman that has its roots in contemporary Earth, but harks back to myth.

An errant wife is threatening the multiverse in which humanity operates, and grudgingly and achingly brought from his rejuvenating slumber, Isaac Hersch has to get his freshly minted ass into gear to hunt down his ex. In following him Broderick ekes out the background information, with a whole heap of neat touches of various kinds. A strong story, making a recent brace of top quality stories from him following his ‘The Qualia Engine’ from the July issue.

A bizarre juxtaposition for me – moving from a far future story to one set in Scarborough on the North East coast of England, which has two deeply embedded memories for me : a family holiday in 1976, and an (ahem) week’s holiday with my then girlfriend of a couple of months, who is now my wife of over 25 years.

The themes of the story are strong ones – a man who has chosen to leave behind his old life to seek out a new life away from Earth, having to leave behind his lover, having to leave behind some degree of humanity as he is transformed for his new environment. And you wouldn’t believe you could feel emotion for a wooden bench, but the memorial bench sitting near a church overlooking the sea contains a mini-upload of the person whom it commemorates, and she is waiting for the sea to reclaim the coast, and for her to be reunited with her drown-dead husband.

A young girl finds an aquatic creature on the beach, but is unable to save it’s life, and takes that failure deep into adulthood. Having struggled to come to terms with this, what chance then that she should come across an identical creature, an be able to banish those old demons?

Robert Reed. Before My Last Breath.

I have to take issue with editor Sheila Williams with her introduction to the story, which for me detracts from the strong to a greater degree than I would like. Regular readers of Asimovs and F&SF will know that Reed is capable of drawing on any number of events in ‘real life’ to make a strong SF story.

This is a perfect case in question. Williams lets us into the inspiration : reading about the finding of graves of early Viking settlers in Greenland, where the more recent graves, in contrast to the older ones, show how those who had travelled far to Greenland became progressively in reduced circumstances, both societally and physically, as the depredations of the environment gradually took their toll.

Having read this introduction, my mind was immediately set rolling on this story, wanting to know more, and imagining the heroic efforts to travel to a far land, the struggles to establish a foothold, and how the generations ahead struggled to maintain what had been created before.

With this in mind, it wasn’t as easy as it should have been to engage with Reed’s story of the finding of a huge alien graveyard, and how those excavating the graveyard realise the newer graves at the top of the dig are a shadow of those buried earlier.

Reed takes the story forward through episodes glimpsed through different characters, which works well, and wraps it up with a sad vision of the culture behind those in the graves.

An excellent story, but any Year’s Best anthologists – please don’t give the game away in the intro!

A ghost story, which is fine and dandy, although personally I’m not too keen on supernatural goings-on, as it’s by definition not SF! It’s a l-o-n-g time since I read Lucius Shepard’s ‘The Scale Hunter’s Beautiful Daughter’ so I’m not clear if the similar title is intentional.

Short piece in which a woman who is interrogated by an AI about the murder of a colleague is able to follow her nose in an attempt to make good her getaway.

William Barton. The Sea of Dreams.

With Garcia homaging ERB’s Barsoom earlier in the issue, Barton pays tribute to the Carson of Venus stories, by way of a very, very personal approach. He’s covered this territory in the past, with his excellent ‘Though I Sang in My Chains in the Sea’ back in the Oct/Nov issue of 2004.

This is a follow-up to ‘In the Age of the Quiet Sun’ from Sept 2008, in which I noted protagonist Mr. Zed ends up with his genitalia returned to him (having been genmod to be impervious to radiation in space). Here the refurbished equipment is put to regular use through the foxy and very willing physically substantiation of the ship’s AI, with whom Mr. Zed is very close.

As with the Garcia story, there is a harking back to what could be presented as ‘the good old days’ before ‘political correctness’, the days in which Edgar Rice Burroughs operated. I’m not entirely sure just how female readers will engage with what is essentially a sexual slave hanging on the actions of the alpha male.

There’s a lot happening in the story, as Mr. Zed and his colleague find a gateway to an alternate universe, with pygmy Venusians, and a 1960s Earth in which he sees a version of himself against a backdrop of political brinkmanship that does in this world push us over the edge.

It’s a good issue, without being a classic.