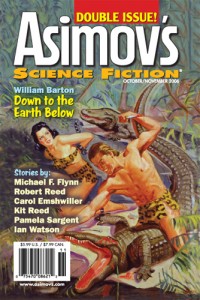 A complex and initially very satisfying story. The story beings is a just-slightly-off-kilter rural American, describing a family vacation in a battered old car which is doomed to failure. Scarily, part of the background is that the trip is against a backdrop of women disappearing : there are ‘missing’ posters up everywhere, and there are secure places for women at the gas stations – and that there it is a very patriarchal society. The whys and wherefores of this are intriguing – it could in fact be contemporary America, as there are evidently equally bizarre ‘religions’ in that big country.

The opening sequences ends with a nerve-jangling potential confrontation takes place with a gun-toting man with an old school bus, with a cargo which sends jitters around the family.

The background to the story is gradually revealed, and we find that we are on an alternate Earth, founded by the First Father, who came across from Old Earth using ‘ripper’ technology, which creates a rent in the small gaps between the branes of the millions of alternate Earths. And this Earth has seen sprung up a range of religions, each with their own perspective on this First Father. The further details are somewhat bizarre, for the First Father was a young student who in fact stole a ‘ripper’ and took himself and a dorm full of college girls off to this Brave New World.

The story of the young daughter, Kala, progresses, going forward several years, whilst more of the backdrop is revealed, including an attempted abduction of her by a young man who is one of a party who themselves are about to set off to another alternate world, to create another Eden.

An excellent piece of inventive society-building, with the only slight problem for me being that structure of the story, in that it feels like a compressed novel, with several key peaks in it, which would work well at a greater length. But for a novella, perhaps just a couple too many peaks in it, as with each peak there is a bit of a surprise that the reader hasn’t crested the summit, but that another peak awaits. But that’s being a bit picky I suppose, as a lot of stories barely manage the odd hillock, let alone a mountain stage of the Tour de France.

Short, multi-perspective horror story in which the final Norman Bates-y perspective is the chilling one. A mother whose children were born after IVF with anonymously donated sperm, decides to track down the father. She hopes that the father will make a difference to the lives of his children. He does…

Michael F. Flynn. Dawn, and Sunset, and the Colours of the Earth.

A longer, multi-perspective story (it could perhaps have been separated from the previous multi-perspective story for the flow of the issue!). Marginally SF/speculative, in that the incident which several witness and many are affected by, is the sudden disappearance of a passenger ferry in Seattle bay. We hear second and third-hand about the disappearance, with some folk tales, some people for whom the loss of loved ones is heartbreaking, and some for whom the loss is not necessarily a bad thing. A transcript from an Internet message board shows one persons grief against the backdrop of inane conspiracy theorist chatter. There is a form of scientific rationale for this Bermuda Triangle type occurrence, but the description of a young boy desperately trying to follow the elder brother he worshipped is a heart-rending one, and five years on, this is a powerful 9/11 story.

Pamela Sargent. After I Stopped Screaming.

A big change of pace and tone – a short piece in which Fay Way ponders, in her old age, just what was going on in King Kong’s mind.

A young boy has a cheap toy-shop gizmo which purports to instantly travel to and back from remote parts of the universe, uploading snapshots to your computer, part of a sort of photographic SETI. As young kids (mostly boys) are wont to do, this has become an obsession, with the school yard full of boys swopping photographs and desperately searching for the rarest images.

His parents’ relationship is failing, his school grades are falling, and it is inevitably going to end in tears. However, (and so sadly unlike real life!), a snapshot his machine captures appears to show a world showing signs of intelligent life, and his PC flags this up instantly, the phone starts ringing, and the young boy’s yearful search appears to have borne fruit.

A young programmer, Gordi, finds his past catching up on him, when his ex-girlfriend Yulani turns up dead. The police are happy to pin it on him, regardless of his guilt or innocence, and he has to pry into his past, and the present of his ex-colleagues, to get to the bottom of who has done what and why. The tech is an intriguing one, going beyond VR helmets, to a technology which pushes not only images into the brain through the eye, but creates a perfect illusion which you are fooled into believing you can touch and smell.

Gordi is cunning enought to not only get the killer, but also get the girl.

Psychological thriller/horror in which we follow a young man who makes up for his lack of physical attributes with a smooth tongue and a suave dress sense. When he unexpectedly finds himself in love with an attractive woman, who returns his love, the memory of his sister’s childhood tormenting comes back to him, vividly and dangerously.

Ian Watson. Saving for a Sunny Day, or, The Benefits of Reincarnation.

Barcodable souls that enable reincarnation – so that no new souls are created, but old ones simply reincarnated into new bodies. But the controlling AI of course has a good memory, and debts incurred in a previous incarnation are very much carried forward into a new life, which isn’t always appreciated when you are a young child with a multi-million debt to service, as is the case with Jimmy. However, he has the smarts, and is able to find a way out of his predicament.

A sort of ‘Monkey’s Paw’ variation, as a young widow finds that each newborn kitten in the litter her pet cat has had, appears to facilitate the return, albeit unseen, of a loved one. With two kitties dead, and two dogs returned, there is a strong temptation to usher a further kitty off this mortal coil….

William Barton. Down to the Earth Below.

Barton has provided a number of very strong stories in Asimovs over the past several years, with ‘Heart of Glass’ (Jan 2000) and ‘The Engine of Desire’ (August 2002), ‘Gods of a Lesser Creation’ (August 2004) being strong (and dark) takes on humanity. More recently his ‘Though I Sang in My Chains in the Sea’ (Oct/Nov 2004) and ‘Off On a Starship’ (Sept 2003) have been strong tales which manage to look forward whilst looking back, and this follows in that vein.

The cover is a tip-off, with the pulp fantasies of ERB and others being the inspiration for a group of young boys some decades back. The narrator looks back on his childhood and how his friends yearned for adventure of the type which throwing your arms open to Mars could transport you to. He tells of how he and his small group of wannabe adventurers visited a local, long-closed mine, and find themselves suddenly in a subterranean world – exactly the type of which they have dreamt.

But Barton takes the story forward, holding the reader’s hand, as he makes clear – increasingly clear – that what is happening is not to be taken literally, but rather as a metaphor – a dreamlike representation of how those fictional worlds helped create the men that they eventually became.

As the ‘story’ draws to a close, there is an aching quality to the portrayal of youthful innocence making way for adulthood, and there is some cognitive dissonance in that the retro/pulp setting disguises a more modern and speculative theme.

There’s a lot of really, really strong fiction in this issue, bookended by Reed and Barton, with Flynn, van Pelt and Collins all providing top quality.