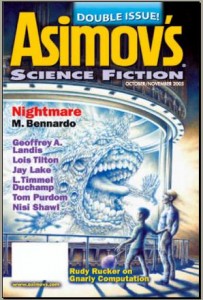 Sabor Haveri, ultra-rich banker, finds his idyllic boating trip, in which his splitting his attention between playing the markets and toying with his concubine. However this idyll is spoilt by a customer of his with a grudge, who turns up on a faster boat armed to the teeth and with several armed guards. Those guards have been specially created, as has his concubine – ‘a fleshy woman with a strong sex drive’. Fortunately Sabor has a ‘chinup elan’ (specified by his mother when he was conceived), and access to a Fabricator (which can, duh, fabricate all manner of things, including ‘people’) and he uses this to evade capture. There then follows a chase through the uninhabited jungle of the planet. I have to disagree with the introductory editorial comments as to this being ‘fast-paced’ as I found it too cumbersome to be readable, overly verbose, leaden dialogue and just lacking in any subtlety or anything other than simply ‘average SF’ as opposed to ‘Best SF’. Looking back on my previous reviews of Purdom’s work I find that I have used ‘heavy going’ previously. This story suffered as I read it (or the first half of it) directly after Paolo Bacigalupi’s ‘The Calorie Man’ in F&SF Oct/Nov 2005, which was way more subtle and properly fast-paced. For me I’d expect the Bacigalupi story to be in Asimovs, and this Purdom story to be in Analog.

Duchamp jumps in with a close narrative perspective on the end of the world as we know it, as society rapidly crumbles before the eyes of the unnamed female protagonist. Mob rule breaks out, initially amongst the young, and then suddenly, instead of being a horrified observer, she finds herself on the streets having succumbed to the madness that has reduced people to virtual savages. She does make it back to her apartment, but her very humanity has been stripped from her. Duchamp cleverly segues from the viewpoint of the shattered woman through was initially may be an observer, but becomes the voice of what she becomes, for ‘she’ wakes up as a composite human, created by an alien race far beyond our ken. The story quickly progresses through short segments as more is revealed to the protagonist and the reader, as the question of human identity is explored in a manner light years ahead of the cumbersome ‘fast-paced adventure’ of the previous story.

Steve Martinez. Out of the Box.

Jacob is working on robotic telepresences, his colleagues operating equipment which is able to work in the ruins of the city outside of which they live and work. His young son has been enrolled by he and his wife in a company scheme whereby he has an implant in his head to control the remote drones – much better than trying to control a multi-armed creature with a joystick. However, things are not quite right, and there appears to be an independent servo mind hopping between the scuttling servos which his son controls, and this mind has a bad attitude.

The setup is an interesting one, but the story rather wanders about in its short length – I reckon that this is a missed opportunity for a longer, better story.

The subgengre Alternate History rarely appeals to me, and the sub-sub genre Alternate Ancient History even less so. I have little knowledge of Ancient Greece, and do not find remotely interesting a story in which what differs from what we know about those times is (presumably) a key element. If it’s not a key element of the story, then what you have is simply Historical Fiction.

Philip C. Jennings. Back to Moab.

I found myself blowing out my cheeks in exasperation as this creaky story progressed. Somewhat bemused, I persevered, as I was on a train and had little else to do. It’s a story in which Janet, a mid-life insurance salesperson, by dint of her interest in antique globes, find herself going through a portal to another world (something she is completely and utterly unfazed about so doing – maybe people working in insurance are made of stronger stuff thanthe rest of us?). There’s a bad guy, ein Cherman viz an alliterative name, Heider Hummel, who actually has zer minions verking for him. Back on Earth after some gunfighting and encounters with the aliens, and finding out that her daughter wasn’t really kidnapped but that the baddies has pretended to be talent scouts and had got her to scream ‘help mummy I’m kidnapped’ as part of a bogu audition, she heads back to work as if it’s all been in a day’s work. Then she heads back into the portal with a crack team she puts together by the cunning ruse of pretending to recruit them for a reality tv show. But they get over to the other side and all begin to drop dead of something or other but Janet spots what is happening and saves her own life.

It’s sufficiently silly to be close to pastiche. On getting home I did a quick trawl and realised that a previous Jennings story ‘Invasions of the Axebeaks’ (Asimovs Jan 2005) had left me similarly singularly unimpressed. I’d hazard a guess though that this story would go down better than any others in this issue with people who have enjoyed ‘The Da Vinci Code’.

Now this is more like it. A far superior story – believable characters, good dialogue, interesting ideas, and just all round more imaginative. Lake provides a take on contemporary magic (none of this ‘windowsium leviosa’ nonsense from Harry Potter), in a strange story of a young woman with a Skill who finds out that stronger forces are after her. One criticism I would make is that, as is happening more often these days, (a trend I first spotted in The 3rd Alternative), is that stories are often written almost as novels taken from TV/films. The story, in particular the ending, has a visual feeling to it as if rather than being conceived as a story to be told, it was conceived at first in a cinematic form, and then turned into a story.

A shorter story set in an amusement park/zoo where ghosts of various descriptions are there for the paying public to view. A father with his two young children is dealing with nightmares, and a trip to see that ectoplasmic horrors isn’t exactly top of his list of favourite things to go. However, in going in to see one of the scariest ghosts, he and his son achieve some kind of bonding.

As with the previous story a first Asimovs publication from a new/newish writer. The style borrows from Ted Chiang’s ‘Story of Your Life’ just a little too much for my liking. A strange father/son relationship is portrayed, with the narrator reviewing the options that the other has taken/will take. We gradually find out the exact nature of the relationship between the elderly narrator and the young boy, and the high prices that both have/will have to pay. Notwithstanding the Chiang feel, a notable first Asimovs’s publication.

Scott has been selling his body as a vehicle for an elderly, rich man to vicariously seek pleasure whilst virtually ‘riding’ him (ie taking control of Scott’s body and overriding Scott’s mind). The rider has been playing fast and loose whilst in the younger man’s body, but Scott meets up with a woman who knows Scott when he is under the control of his rider, and they are able to plot a revenge.

Geoffrey A. Landis. Betting on Eureka.

A tale told in an orbiting spaceport is related – a tale of potential riches and double-crossing. It looks like the miner who has mortgaged his life on the finding of the fabled Eureka asteroid may have overstretched himself. Although he appears slightly too confident for this to be the case…

Horror story in which a murdered girl is able to achieve some measure of revenge on the sister who did for her.

Something for everyone : alternate history for those so inclined, ditto ancient history stories, horror stories, and ‘fast-paced’ stories. For those looking for the quality expected from Asimovs it is perhaps slightly thinner on the ground than I’d like to see, with Duchamp providing the most challenging piece, with Lake, Skillingstead and Landis providing stories up to their standard, and newer names Martinez, Bennardo and Kosmatka providing solid support.