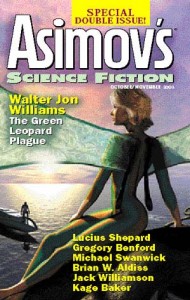 A very skilfully crafted short story. Set in the same future as his well-received ‘Lethe’, this is of an equally high standard.

Williams intertwines two, or in fact three stories, tying them together in a powerful ending.

We start in the warm waters of the Philippine sea – literally so, as Michelle is a mermaid, and we follow her on a fishing trip. She is not quite a mermaid – but a human currently occupying a genmod body. She is given a job by an aged scientist by the name of Davout – the job: to research a gap in the life of Jonathan Terzian, a scientist whose Cornucopia Theory literally changed the world.

The stories gradually unfold, with Terzian’s bravery offering the world a chance to redeem itself. Where a less impressive story would end here, Williams then ups the ante by showing, via Michelle, that the scientific breakthrough for which many died was in fact not a success – almost the opposite. And Michelle’s lover, who has been trying to find her since his last death (people can upload their memories to ensure that any fatal accidents are easily recovered from) finds that there is something she knows about him that she is not about to forgive.

Jack Williamson. The Man from Somewhere.

Williamson has of course been writing SF for pretty much the entire period SF has been written, and to find something truly new to squeeze out of a time travel story must have been a challenge.

His opening scene, an amnesiac man in tattered clothes appearing on a doorstep, is a classical start. As the story unfolds we find out more about the ragged man, told mostly through the mechanism of him recounting his previous night’s dreams over breakfast the following morning.

What he has experienced of the future is not promising for Earth, and what he has come back in time for has remarkable personal implications for the young couple with whom he stays.

A most unlike-Shepard story, as he turns his hand to a more mainstream SF story than is his norm.

Quantum Earths are the background to the story, in which Shepard expertly takes us inside the head of the narrator, whose single moment of scientific brilliance has paved the way for others. When Men in Black turn up to interview him, they offer him an intriguing glimpse of where his work has gone – an experiment in a remote forest has led to …. something strange being let loose, something almost human.

Dick Cyrus’s interest in the story leads him to some interesting hypotheses, and he undertakes to see if he can explore the woods to find what he believes is an alien who will be gradually becoming more human.

A glimpse of the tall alien creature is all he gets to start with, but his life is to be intrinsically linked with the female alien, to the extent of ending up in domestic bliss.

A ‘they lived happily ever after’ ending is not allowed us, as the true nature of the scientific experiments, and the quantum Earths which are so closed to ours, are played out.

With Benford you generally get some top quality science (about which I am in no position to comment) and top quality fiction, and here he does it again.

Young Ruth is a trainee librarian in the far future, who has the chutzpah to take on a major challenge in her first professional task – to take on the study of the ‘Sagittarius Architecture’, which many before have studied.

She feels she can bring a fresh perspective, and, true enough, her conversation with the complex alien AI is indeed more successful, and she ekes out from the AI some snippets that are to prove to be the saving of the human race.

Michael Swanwick. Coyote at the End of History.

A story of Aesopian delight, in which through his eyes we see many of the failings of the human race.

It sometimes takes a story like this, from a true master, to shake up what might be a bit of complacency amongst other writers. Aldiss gets stuck in with a bit of world and society creation, and some New Wave 60s stuff (the chess match at the end) that shows that there is a lot of mileage left in SF if you are willing to explore those alien vistas (as opposed to re-treads of ‘scientist stuck on the moon/mercury/venus/mars/etc who has problems with his/her oxygen/transport/etc and who manages to save him/herself through cleverly etc).

Not quite up there with the likes of ‘Hothouse’, but head and shoulders above a lot of current SF.

One of ‘The Company’ stories, in which Randolph Hearst himself is offered a chance to extend his life.

The annual double-issue is a doozy, with Dozois able to put a list of author names on the cover to die for. I’ve got a mental picture of Dozois at next year’s Worldcon moving amongst the crowd hitting people over the head with this issue, demanding to know ‘Who’s the Daddy? Who’s the Daddy?’ It would of course be a rhetorical question.