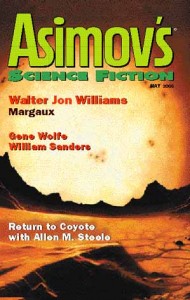 Chris Willrich. Count to One.

We meet Kwatee the Changer, playing god. He is the embodiment of an AI which is using a truly enormous simulation of Earth to study climate control options in the face of global warming or a coming ice age.

As he ponders the few alternative choices in saving the Earth, he comes under attack from those who would wish to close down the study for fear of the choice he may make, and the potential for that choice to be more than a software simulation.

Kwatee ponders Fermi’s Paradox, and wonders whether, if life is indeed so rare as it appears to, should there be a sacrifice to make to ensure that life, any life, should continue. Is humanity expendable in order to ensure that life, albeit on a microscopic level, can be maintained in the Universe.

A shorter story from Wolfe, in which robots attend the final days of the last man. Whilst we are left to mourn the passing of humanity, the robots which will survive us displaying humanity in their behaviour, so perhaps not all will be lost.

A hot summer in th 50s, and a young boy’s summer is highlighted by an archaeological dig in the nearby desert. However, the bones which are find are anomolous. The ancient bones are wrapped in fragments of futuristic clothing.

However, the find is buried in the desert, covered up, as is the infidelity between the boy’s teacher and one of the archaeologists.

A new series of the author’s Coyote stories, which have increasingly left me unmoved. Here we have a High Chapparal in space. A young single homesteader is befriended, by a mentally deranged mother and her son. The mother and her son were original settlers, but have stayed behind. They still blame the loss of their other son/brother at the hands of the young man who was out boating with him at the time. A celebration which sees a hollerin’ and high-jinks taking place on the main street provides cover for that young man to revisit. Except instead of being set in the West, it’s set in space.

Barth Anderson. The Apocalypse according to Olaf.

There is magic, and strange goings-on, with the protagonist having to face up to some new and some old demons.

Gredel, a young seventeen-year old girl has a fairly stark life off-planet. An ineffectual mother in an abusive relationship with another man. The girl is a favourite of a young hood, and her future is not particuarly promising. It is also likely to be short.

Her physical resemblance to a wealthy young woman provides an opportunity to improve her lot. The young woman, financially secure, is emotionally brittle and drug and alcohol dependent, and seems hell-bent on not making the most of the chances she has.

Gredel befriends the rich young woman, and tries to maintain that friendship whilst bettering herself. However, she faces an inevitable choice – will she take her new friend’s place in life, regardless of the cost to her friend?

A strong collection of stories, with Steele being the most routine.