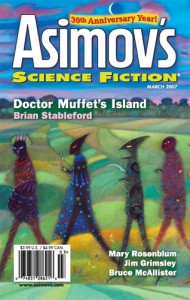 Mary Rosenblum. Breeze From the Stars.

An almost quintessential Asimovs story. Jeri is in low Earth orbit, part of a crew of rough and ready rock jocks – pilots who scour space for space junk and asteroids likely to cause problems for other vessels and habitats in the area. He’s moody as his latest posting is at Despatch, the command station which scans space and directs the rock jocks to do their job. It’s not a good posting.

However, the exact nature of the posting becomes very clear, as Delfinio, who runs the nominally one-man Despatch, picks him up and begins to explain that the posting is just a bit more than Jeri expected. It transpires that Jeri’s birthdate has made him sensitive to the Ophiucus magnetic field that focusses some very ancient galactic interstellar winds. And rather than simply monitoring computer displays, Jeri can become at one with much bigger horizons.

The story generates a degree of sense of wonder, but slightly grates in a dramatic ending when Jeri saves many lives by being out in space at exactly the same time as a very rare solar flareup, which he spots and to which he alerts others in orbit.

A short, literary piece of writing, in which McAllister puts some flesh on the historical bones of the ‘Lion of Lucerne’, a statue which commemorates fallen heroes of the Swiss Guard, and the myth that a noble lion was seen amongst the noble soldiers as they fell.

More traditional Asimovs fayre. The sfnal conceit herein is that people guilty of crimes can have memory of said crimes banished through technological intervention, but have to undergo an annual single-day in which those crimes are restored. Morgan is employed to help those undergoing their annual day of remembering, but he himself has guilty secrets, although he, as they, believe that what they have been helped to forget can not in fact be quite that bad.

In a post-Earthquake, disunited United States, he is helped through his annual remembering by a colleague, and the nature of his crime, and his relationship with his colleague, is gradually revealed.

Short piece in which far future dilettantes pick up old words as party pieces, thus enabling the story to start with the word ‘unbeknownst’ – a word which you might expect to be atop the list of archaic words to appear in Analog, but not in Asimovs.

Coates creates a very vivid picture of South Dakota in deep winter – it’s very cold! The narrative, what there is, revolves around a woman who pays a visit to her ex-husband, estranged on account of a number of things, including his belief in his contact with aliens. She realises that in fact they might be after the same thing.

The lengthiest contribution of the issue is a follow-up to Stableford’s ‘The Plurality of Worlds’ (August 2006), in which Sir Francis Drake visited the moon is a sort of pastiche Wells/Vernean tale. This is more of a Defoe/RL Stevenson type tale, in which Drake is sailing the seas, and happens upon his colleague, Walter Raleigh, and sundry others, including a Dr. Muffet and his daughter (and this little Miss Muffet is not afraid of spiders).

I perservered for a while, but it really didn’t do much for me, which is a shame, as Stableford’s science fiction invariably does. If you fancy a story that has the feel of bygone writing styles, wherein a request to give a quick explanation elicits a page and a half of exposition from one character, then this is the story for you, but 49 pages for this story is a of space out of a single issue’s fiction content.

Rosenblum provides the most typical Asimovs story, which worked well. The other stories, with the exception of Stableford, were quite short, but effective in their own ways, but overall not a particularly strong issue. Excellent cover by one Tor Lundvall.