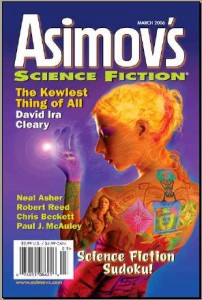 The August 2005 issue of Asimovs introduced us to the Gabbleduck (‘Softly Spoke the Gabbleduck’), a strange creature on a strange planet. This story opens on another planet, Mascada, most effectively introduced : ‘The sky was a light aubergine, the nebula a static explosion across it fading now with the rise of the sun, ahead of which the gas giant Calypse was in ascent: an opalescent orb of red, gold, and green.’

As with the previous story, the characters are equally well described – Jonas, an experienced Taxonomist, and Shardelle, a linguist, who is struggling to understand (as are many others) the language of the gabbleduck. The introduction of a linguist fazed me at first, but fortunately Asher doesn’t go down the well-trodden (and not very exciting IHMO) path of detailing the scientific cracking of the language. What happens, as in the previous story, is that the couple are thrown together (in more ways than one, dearie me) and end up in a potentially terminal situation amongst some of the nastier denizens of the planet.

They witness the evidently welcome death throes of the Gabbleduck, picking up the long history which has brought about the strange creature, in a story that has a good mix of elements to provide a rounded sf adventure.

Deborah Coates. 46 Directions, None of them North.

Part-narrative/part-diary entries from a young teenage girl who has to, just has to get her mom to take her to Alaska to meet up with the aliens who have been phoning her on her mobile. Coates gets into the mind of the young girl quite accurately (not that I’ve ever been an expert on teenage girls) in a short and pleasant story.

A prequel to a story ‘The Circle of Stones’ which appeared in Interzone back in 1992 (and available here on the author’s website.

The story feels somewhat retro, with the small crew of an international mission featuring Tommy Schneider (whose sexploits are splattered over the tabloids), Mehmet Haribey, and god-fearing Dixon Thorley. The three hear that their final mission has been cancelled by the White House, minutes before they are to leave, but decide to go ahead anyway. In fleeing the space cops they make a dangerous jump and end up taking a pursuing cop vehicle with them, compromising both their ship and that of the the cops.

A long, long, way away from home, they stumble across an anomalous planet, capable of supporting their life, but not circling a star. The story concludes with Tommy and the female cop, Angela, the only two left on the planet, a veritable Garden of Eden, with Angela (as we say over here) having to close her eyes and think of England , as the two prepare to populate the planet.

The story alternates between the two perspectives, but for me feels just too 1940s/1950s to work.

One of Reed’s neat stories which takes one or two ideas and explores them at just the right length, although I reckon his family must dread any conversation with him ending up, suitably sfnalled, in print.

Here he takes as a starting point a young boy finding an empty chrysalis shell, and we are taken through a journey which starts out as a father-son relationship exploration, with clearly something not quite right. And it closes with a flourish, as the exact relationship between the two is explored, and the madness which has struck humanity which led to their finding each other is explained.

Part of his ‘Quiet War’ series which has previously featured:

and which had an excellent prequel in the shape of PS Publishing chapbook ‘Making History’ (BestSF.net review | more insightful review by some bastid who does this reviewing thing as a full time job) which set the basis of the solar-system constrained storyline

This story is set on Ariel, Uranus’s fourth largest moon, and is the last testament of a genmod killer, who has been lying low on this out of the way moon for some time. A spate of vicious murders have raised his suspicions, and he realises that one of his kind has recently arrived, and will draw unwelcome attention which will undoubtedly blow his cover. He has to identify and confront his fellow killer, and it is this short, explosive and vicious encounter which has led him to his lonely, slow death.

A good addition to an excellent series of stories.

The author’s first Asimovs story, ‘Red Hands, Black Hands’ (December 2004), and his ‘O One’ (‘Live Without a Net’ review and online here were OK for me, without being standout, but here he provides a very vivid story.

A blend of Gormenghast and Di Filippo’s ‘A Year in the Linear City’, this story features a Cathedral which covers thousands of miles, and Steeplejack North spends his life on the roof, clearing away the dead souls who have not made it fully to whatever heaven they aspire, but are stuck in the butresses and other architectural features. Occassionally assited by a psychopomp, who carries out exorcisms to clear out the most problematic, Steeplejack North finds himself with the opportunity to obtain fabulous wealth from one of the strange creatures which live on the roof.

An impressive piece of world building.

David Ira Cleary. The Kewlest Thing of All.

The cover illustration for this story is of as high a standard as the story itself. A near future in which body ornamentation and communication go hand in hand – quite literally, as the palm, and any other body part, can be used to receive messages, and to display ads or artwork.

Bonny Brood is under the employ of a man, her job to stop others taking the alternate route, to non-adornment. Her relationship with him is virtually that of prostitute to pimp, and we see her being manipulated as she in turns manipulates a dowdy, pudgy woman into taking the adornment route that will spell benefit for Bonny.

The story is stylishly written, in describing Bonny and the society in which he lives,and for me is a pretty good representation of 21st Century SF, in contrast to the more traditional Beckett story above.