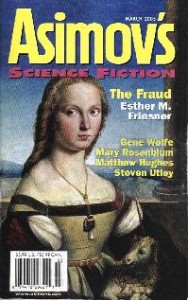 The cover illustration (a Raphael no less) is a good companion for a piece of historical fiction from Friesner. The viewpoint character is a young man, travelling by horse from London to the house of Sir Hadrian Ashgrave. George is in the employ of Lord Edgerton, and betwixt the pair they have a cunning plan to show Ashgrave for what he is – a man willing to go to extreme lengths to hide the fact that he has been dallying with a young woman on his estate. Sir Hadrian, they surmise, is behind the story that the young woman is with child due to a liaison with a unicorn, no less (you might be hard pressed to spot in the cover illustration on this page that it is an infant unicorn being cradled).

George purports to have an apparatus which can capture an image of that which is in-utero, and it is with this fraudulent equippery with which they intend to give the lie to this ourtrageous fiction. However…

A short, tantalising piece (as is often the case with Wolfe’s shorter writing). Here we have a monologue from a driver, who details his contact over several years with Wilhelm Boyd Anton, more commonly referred to as Billy, or Billyboy.

Billy has, it transpires, found a most peculiar card in the gutter, one which his features his face, and the detail of his demise. The origin of this card is perplexing … anomalous. The future the card maps out for Billy does not tie in with his self-harming present, but may offer a picture of an alternate path which his life could have taken/has taken elsewhere.

Levine’s ‘The Tale of the Golden Eagle’ received many plaudits last year, including from me, and my plaudits are as rare as hen’s teeth. Here he doesn’t quite reach those soaring heights, but does paint an effective picture of a down on his luck salesman plying his trade in a very inhospitable offworld environment.

The aliens have a difficult language, and a strange way of doing business – or not doing business, as is his experience. However, after some difficult days, he does manage to spring a big deal, but in addition to winning the contract, he does realise that perhaps the aliens might not know the price of anything, but do know the value of everything.

As one who has been there, I can say that he very effectively gets across the sense of alienation and frustration of a traveller in a strange country. Mind you his traveller could have been worse off – he could have been visiting Paris!

One of Utley’s Silurian Tales, which for the most part don’t do a whole lot for me. Maybe reading Silverberg’s ‘Hawksbill Station’ 20 odd years ago has something to do with that? Here he provides a short piece in which a scientist working back in the Silurian past who receives news of his wife’s death back on present-day Earth, wonders whether the conundrum of Schrodingers Cat offers him a way of avoiding that fate for her. To my mind it is the kind of story which could work in SF 101, as a way of introducing high school students quantum anomalies, but it seems out of place in Asimovs.

A lot of pages for not a lot of story. A scientist who is helping to breed quasi-Dodos using old Dodo DNA and Turkey’s to hatch them (Jurassic Park with Dodos not dinos) objects to plans to tweak them to make them more marketable, and sneaks off some embryos so that he can breed true Dodos back at his farm.

Erm, that’s it. There are some interesting details for those of you who like to read about the contents of cupboards, and there is a Russian ice-maiden scientist (who remains unthawed – I mean, what is the point of a Russian Ice Maiden scientist except to be unthawed?), but there isn’t much in to which to get your teeth – it felt more like a story that you’d find in Analog than Asimovs.

Matthew Hughes. The Devil You Don’t.

A three-pager, which is the right length for a time travel story with a single simple central conceit : if you go back in time with evidence to help those in the past change what will happen, will they act on the evidence supplied. Sir Winston Churchill certainly does not.

A near-future USA which is suffering politically, economically and healthwise. Lansing is an 80 year old who makes a living by doing house calls, harvesting organs from those who those who need the money, and who can spare a lung or a snippet of a kidney. Out in the boondocks he becomes involved with a hardpressed policewoman who is trying to solve a series of murders carried out by someone who seems to be using somewhat less advanced methods to obtain such organs.

Sparhawk makes his first appearance in Asimovs, having had several stories in Analog (‘Magic’s Price’ a notable story from 2001).

Some very enhanced combat marines are (we are to assume) on a rescue mission, landing on a settlers’ planet to retrieve the obstinate humans who have stayed behind, before the aliens with whom we are at war can capture those settlers and turn them (quite horrifically memorably) against us.

There is a neat twist in the tale, however, as we find out just how far humanity is going to have to go in order to save humanity – the fate of individuals is nothing when the whole race is fighting for survival.

The best is saved to last, IMHO, as we get the kind of story with which Asimovs excels

Ahni Huang has left Earth to search for her brother’s killer, who is on one of the several orbital environments which encircle Earth. We start out with a tense thriller, with family honour at stake, and with the stakes very high. However, Ahni stumbles on a Bigger Issue, in which one of the huge greenhouse environments is hosting some very strange creatures, and they are drawn into the internecine drama, which is of much greater concern to her.

Rosenblum creates an effective off-Earth near-future background, with the drama quickly unfolding, and providing a satisyfing story of 20-odd pages which could easily have been stretched out further.