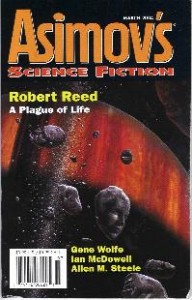 Robert Reed. A Plague of Life.

Reed sucks us into a story with a lot of history. A long-lived dog is our introduction to a near-future Earth in which overpopulation has become a major problem, exacerbated by those who have lived for centuries, or, indeed, millenia.

Hannah reluctantly returns to the family farm, ruled by her Grandfather, fighting fit and pumping iron despite his age, and her mother, who is finally feeling the effects of her longevity. Hannah and her young son are irregular visitors, and this is, if she is to get her way, to be be the last visit before heading off to a new start on a new planet.

The dog is a lynch-pin to the story, through which we have revealed the mystery of Hannah’s murdered father, and the dark secret which Hannah is able to turn to her advantage.

An interesting setting, and a claustrophobic piece of storytelling, although the pieces fit together just too smoothly IMHO.

A short piece by Wolfe, getting into the head of a young man who has designs on the daughter of his boss. However, she becomes betrothed to a man of greater pedigree, although of a much different pedigree as we have finally revealed – for the Pulp Covers to which Wolfe refers, which feature young maidens being threatened by aliens with tentacles are not the real threat : for the aliens will be much more insidious and it is the aliens with testicles of which we should be afraid.

Sarah A. Hoyt. What She Left Behind.

A young maiden of faerie blood betrothed to an unpleasant human is the stuff of fairy tales. However, the maiden in question flees the fists of her husband after one beating too many, leaving her infant son with him. No small wonder then that as he grows up, the victim of physical and sexual abuse, that his mother’s return to take him to a better place is not warmly welcomed.

A not entirely successful story in which a near-future Infoglut society in which the media is used to dis-inform is the setting for a sketched-in story of a young man who fights back through releasing a virus which blocks all but the most Zen-like information. Sketched in, in that the story needs to have a bit more length and depth to build up any real tension and interest.

Beckett has been a regular in Interzone for many years, and several stories have featured ‘Shifters’, people who can pill-pop and visit Alternate/Quantum Earth’s. This sequence of stories hasn’t really grabbed me as there seems to be missing an underpinning raison-d’etre for this. Beckett uses his social work background to paint a painfully accurate picture of a teenage girl struggling with that which life has dealt her, and her dealings with some well-meaning social workers. The girl gets a chance to grab some of the pills to take her to an alternate reality, but the pills don’t work properly and she is left still needing to run from herself and her current situation.

Yet another installment in Steele’s Coyote series, the success of which continues to baffle me.

A short piece – one which paints quickly an interesting backdrop of an Earth orbited by habitats but the surface of which is far removed from where we are now. In terms of being a successful singleton short story it doesn’t really work, reading as a segment of a longer work.

Ian McDowell. Under the Flag of Night.

Not a classic issue by a long shot, with the majority of the stories missing that certain something, and none likely to remain in the mind for long.