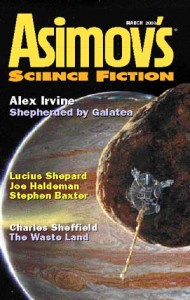 A few pages in, with a lot more information about the chemistry in the upper stratosphere of Neptune than I could ever want to know, I did a quick check of the front cover to see if I was reading Analog.

Nope, I was reading Asimovs, and to give Irvine his due the story did go beyond the oft-used plot device of putting someone into a predicament and seeing him cleverly get out of it.

Stig Davidsohn is in his ship Eightball, trying to harvest diamonds from the upper reaches of gigantic storms on Neptune (I’ll skip the chemical processes by which this takes place). Back at base with a meagre harvest, he finds that he is in really deep doo-doo. His reactor needs a service badly, and he will not have time to make another trip before his contract is up. And without another trip and chance to collect some diamonds, he will be in danger of losing his ship. And having recently lost his girl, that would leave him pretty low.

Turning down an offer to do some piloting which said ex offers him, Stig takes his ship out without the required service. But he finds that the risk to him and his craft is overshadowed by the need for him to rescue the tourist craft his ex’s boyfried is piloting (badly).

Can Stig rescue the tourists and grab a mega-mungous diamond, and win back the girl?

If this was Analog, chances are the answer would be – you betcha. But it ain’t. And he don’t.

I’ve taken exception with some of the stories published in the SF magazines which have tried to make sense of 9/11, in a couple of cases by using creaky SF devices to get those ‘responsible’ to face up to their actions and to regret those actions.

Shepard addresses Ground Zero in a different way. A small team of workers on Ground Zero head off to a bar after each day’s work, each of them struggling with the aftermath and their own response to it. A young businesswoman is a regular at the bar, and she seems strangely out of place.

Baxter must be there, word-count wise, with the likes of Asimov and Silverberg at their pomp.

This is one of many short stories in his XeeLee sequence, a milieu which he could draw upon for decades to come. The danger though, is that some stories don’t quite live up to the high standards he can produce. I read his novel ‘Raft’ recently, as it was supposedly the first in the Xeelee sequence. It isn’t really, as it simply shares some technical background. That novel, however, does offer some really inventive world-building.

‘The Great Game’ is OK as far as it goes. It fills in a bit of the Future History, but doesn’t really set up any great action.

Sally Gwylan. In the Glasshouse.

Back in the Depression a young girl leaves the train she is hobo-ing on, and manages to find her way through the deep snow and freezing cold to an IceHouse in which a group of youngsters who are similarly dispossed are staying.

She senses that something strange is going on, and, true enough, she catches a glimpse of a doorway to an infinitely more promising world.

The story suggests that it is part of a bigger picture, although this may not be the case.

A short short from Haldeman. A bit of a shame that Dozois/Williams didn’t send it back to him and say – ‘Great story outline. Give us 10,000 words and we’ll run it’. They would certainly have done that to a lesser known writer!

The ‘story’ is in the form of a written explanation of why Earth is about to be pulverized by meteor shards : genetically modified spacefaring humans, from Basque stock, are peeved to find out that they have been programmed to become sterile after ten generations so that they will die out as a race, their initial pioneering role having been fulfilled. Did I say peeved? Nope, they are pissed off, big-time.

A murder mystery from the now late and lamented Sheffield.

A sort of smoking gun mystery, although it is a smoking scientist. Smoking on account of him having been exposed to some very very high levels of radiation.

The conundrum: he’s in the middle of the desert, with no obvious source of radioactivty beyond the normal background levels – in fact he is near some zero-radiation levels.

Can the lawman and the scientist solve the riddle? Heck, those of you with a scientific bent will have spotted a big clue in what I have written!

With the exception of Shepard a reasonable issue, but not a standout.