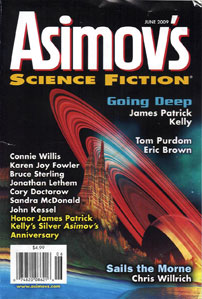 The 25th consecutive appearance in a June issue of Asimovs, a notable achievement, neatly matching my wife and I celebrating our 25th wedding anniversary on the 15th of this month. I wonder if Kelly has a slight frisson marring his celebration, as for us a Silver Wedding Anniversary is something for old people!

Doubtless there was a touch of the nostalgia in reaching such an anniversary in providing a story looking back at someone with their whole life ahead of them, and with decisions to be made. Mariska is living on the lunar colony, not a great place for a 13-year old when the stars are calling her. She is approaching her age of majority, which again is not necessarily great, as her ‘foster’-father’s paid contract to care for her will expire. He mother is due back in port, a mother she has never seen, after making a decision that those stars now within reach, were stars she had to reach for, at the expense of being able to bring up her daughter.

There are some very complex issues surrounding the rehabilitation of offenders, recidivism, community reaction to perceived high-risk offenders such as paedophiles. And in a networked world, with public opinion and reaction to news items tilting the balance away from traditional ways of working, and participation in events rather than passively consuming and reacting.

Purdom addresses these issues, but in a heavy-handed manner more common to Analog than Asimovs. Every issue is clearly signposted, there are no subtleties, merely opinions at opposite ends of the spectrum shouted loudly. A huge government-backed experiment is underway in which (rather unbelievably) and entire township is populated to explore whether a violent ex-offender who still has issues over controlling his anger, can safely be integrated, with a new fangled medication keeping him under control.

Unfortunately, those against his re-integration have already found an antidote to his medication, enabling the risk to the community to be clearly highlighted, and the programme terminated.

There’s a low-speed chase to finish the story, and truth be told, it won’t be troubling the Year’s Best anthologists. Although Purdom may well have created Silverpunk, a low-octane suburban version of cyberpunk for those past retirement age.

Neat little story of the dangers of becoming too reliant on computer-augmented reality (just as this technology begins to take off). Jacyn is stumped when he arrives at his apartment door and it refuses to open, and everything goes grey, as his embedded chip goes down, he goes offline, and is totally unable to interface with the world, leaving him at risk of starvation or hunger.

Brown’s first appearance in Asimov’s. He has been writing for some time, and was a regular in David Pringle era Interzone during the 90s, but has been out of favour with the new regime.

He provides a vignette of a relationship between a pilot, his long-standing female engineer, and his new AI. The twist in the story is that the AI is housed in a very, very attractive human form cyborg form.

Is he swayed by her swaying bits, or by the brain inside the casing?

Can the AI possibly learn human emotions, and reciprocate? Due to the short length of the story, we find out quickly enough. However, there is a twist in the tale, as the AI realises that she has made a mistake.

It’s an interesting idea, but in the space available doesn’t really have time to get into the many psychological troilistic nooks and crannies presented.

Morgan Island, in the middle of Lake Erie, has a quarry in the centre of it, and in the summer the people from the mainland come over and hand over monsters for pitching into the quarry.

It’s a subtle piece of world-building, a world just slightly different to ours, with the same human emotions and motivations, and a neat touch being the ambivalent ending, in tune with the people of the Island.

I have eschewed Willrich’s fantasy stories in F&SF, but this is as good as his previous SF story in Asimovs (‘Count to One’, May 2003).

He shows his librarian’s roots in putting ‘The Book of Kells’ into space. Its a confined drama, with a well drawn case of crew and aliens (some of the more alien of aliens that you’ll find), and an interesting setting of our race being constrained in our our solar system by incoming alien races.

In taking a very precious cargo, and finding it missing, and being menaced by not one, but two vessels suddenly appearining nearby, the captain has to work out who he can rely on, which alien is more than they actually seem, and just exactly what was that green goo?

A strong collection, with the Purdom story somewhat of a struggle.