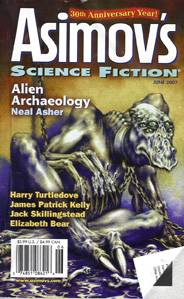 Harry Turtledove. News From the Front.

Alternate History relating the role played by FD Roosevelt in getting the US involved in the Second World, through the means of newspaper clippings. I’m the wrong side of the Atlantic and the wrong side of 50 for the fine detail to be clear to me, and it’s a form of speculative fiction that I really don’t have much time for at the best of times, so I’ll press on….

Short piece set in an arid dry town, about to vote on whether the lack of water should mean the abandonment of their town. And, erm, that’s about it. Phillips handles the description and the atmosphere well, and you can smell the sweat and the dust, but I do like a bit more from my science fiction.

R. Neube. Studies in the Field.

A scientist has spent quite some time on an alien planet, studying the dominant life form on the continent on which he is based. He has pretty much ‘gone native’, concerned much less with the gruesome loss of his grad students, than the future of those he is studying. When they are threatened my creatures from another continent, all pretence of being an impartial observer is lost as he very actively ensures that they are not overwhelmed by the other race. On a minor page layout note, why would you put at the bottm of the penultimate page a reader re-subscription advert – which initially makes the reader think that it is the last page, and interrupts the flow of reading the story? In terms of the story, its a welcome departure from the bog-standard xenolinguist stuff that is frequently churned out these days, although missing something to make it a bit special.

Robert Reed produced a story featuring a runner recently, and fellow runner Kelly dusts of his Nike’s and follows suit, with a take on the ‘I see dead people’ milieu, with a runner who is very definitely running to escape her memories, although said memories are more than able to keep up with her. She ends up with a choice of two paths to take, one which carries on round and round the track on which she has been running, and one which heads off to a happier sunset. Which will she take?

Bear manages to stay just the right side of mawkishness in a story featuring a battle-damaged mech, ekeing out its final power reserves whilst stranded on a beach, the steep cliffs to which she is unable to climb. She is dedicating her final days to making memorials for the humans at whose side she fought, and who died at her side. When befriended by a youngster, she tries to set him on the right tracks at the same time as ensuring that her memorials for fallen colleagues are finished.

A story that could have perhaps been given greater length. Near future graffiti artists, using hi-tech to make 3D tags, include amongst their number a couple with a rather more complex background than others, and it is this background which works well with the squalid surroundings of the graffiti artists which was an interesting one which was not exploited to the max.

There’s an element of speculative fiction herein, as cross-border migration in the near future is somewhat restricted, but essentially it’s a short piece about a woman marrying into a close-knit family who to varying degrees resent her as an incomer.

Fitting into Asher’s Polity sequence, this story provides more, much more on the creatures featured in ‘Softly Spoke the Gabbleduck’ (Asimovs, August 2005), and ‘The Gabble’ (Asimovs, March 2006). There’s some fast paced drama, as xeno-archaelogist Alexion Smith (who is not all he seems) has the misfortune to be left for dead by the hit-woman Jael, who takes from him an Atheter artefact. Her misfortune is to leave him for dead, but not quite dead, and he is able to follow her trail. The exact nature of the artefact, and the Gabbleduck is revealed in a dramatic finale.

Asher’s story is the most substanial of the issue, with Skillingstead providing, as he tends to do, a more refreshingly different story than is often the case.