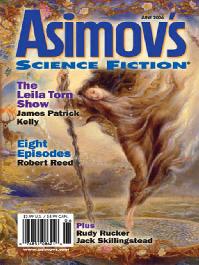 An intriguing story, the POV being the AI controlling the long-running eponymous TV show. Several seasons in, the AI has gambled on killing of the main character. Great for instant ratings, but will the longer-term impact be terminal? She has to, as any TV producer, work with the men in suits from the TV company for whom the demographics and ratings points are the be-all and end-all, massage the egos/anxieties of the stars and bit part actors, keep an eye open on rival programmes, and so forth. The actors spend most of their down-time in a virtual reality which they prefer to the ‘reality’ of the TV show, or the ‘real’ reality of life, and it’s all very shallow, stressful and inward looking – not a great deal different from The Larry Sanders Show!

However, the stakes are upped by a visit from someone who is willing to play for very high stakes – will the AI have to enter a Faustian contract to keep the show going? But of course, the AI knows that a contract ain’t worth the paper it’s written on, if it hasn’t been signed…

Jack Skillingstead. Life on the Preservation.

A young woman is on a mission to undo the work of aliens, who have left Earth in post-apocalyptic meltdown, save for a domed city in which whose residents are ‘doomed’ to cycle through the same 24 hours. Kylie arrives with the means to destroy the city, but finds herself sucked into the intense life in the city, and finds she has a taste for a lot that is on offer. And she has to make a choice as the final minutes of this day end, and the same day will restart at midnight.

The story flows very quickly, with the short staccato sentences driving the plot along quickly (perhaps a little too quickly), and gives a lot in a short space.

Scott William Carter. The Tiger in the Garden.

A human settlement is visited by one of the arrogant and powerful Bal’ani, who has come to bring to justice one of the settlement, for crimes many years in the past. Those crimes – hacking – are seen by the Bal’ani as terrorist crimes. The humans are more inclined to see them as the oppressed rebelling against a tyranny.

Jose is able to stymie the Bal’ani, although through a procedural anomaly which keeps the now senile hacker on the planet – not an entirely satisfactory ending as it leaves unresolved the key issues of oppression, the right to freedom, and the extent to which a senile oldster should be held responsible for actions in the past.

A very clever look at the Fermi Paradox, in which a TV series, which could be a drama, but could also be reality TV, appears to show evidence of alien visitation. But there are questions about the TV show. Is it perhaps an alien message?

More than a touch of the Analog scientist fiction – a scientist working on drugs which can induce emotions, is lured into commercial applications of said drugs, whilst his wife is withdrawn, suffering from Prospero’s Disease, which makes identifying emotions problematic. Can he find a drug that will help her, and can he come to terms with his work.

Ian Creasey. The Edge of the Map.

Nanotech surveillance has got to the point of pretty much providing global blanket coverage, leaving almost nowhere which can’t be viewed on camera. This has reduced the need for news reporters to be onsite, and one of the last of this breed is deep in the African wilderness, trying to find the last unmonitored spot. This leaves the ‘weird-hunters’ with nothing left to hunt, as the likes of Bigfoot etc have been clearly shown not to exist – unless, of course, they have retreated to the last unmonitored spot. Where this journo is headed.

A germ of an idea, although the story itself doesn’t perhaps do as much with it as it could.

Rudy Rucker. Chu and the Nants.

Chu being a four-year old boy with an autistic spectrum disorder, and Nants being being bio-mimetic self-reproducing nanomachines, developed by the company which Chu’s father (himself a borderline autistic scientist). Fortunately, this isn’t (being Rucker it wouldn’t be) a standard scientist fiction story in which dad manages to help his son through his science.

In fact, dad’s skills get to be used to send nants up onto Mars, where they create a quarter billion kilometer Dyson sphere. The mission is backed by the US government, and, surprise surprise, everyone on Earth gets to see the President’s face beaming down beningly on them.

However, the nants have a mind of their own, and they use this to quite a dramatic effect – and humanity starts to embrace the Singularity as they are Strossed into virtual beings run in a reality controlled by the Nants.

Chu’s dad is set against this, and the scientist fiction comes in as he, against the clock, tries to use his son as a physical Trojan, so that when his son is taken into the digital realm, that which is encoded in his brain, causes an almighty system crash.

An excellent story – for my money, streets ahead of the Vinge’s pedestrian ‘The Cookie Monster’ a couple of years back, and good to see Rucker in Asimovs.

A clumsy title, and the story similarly so. The intro suggests an alternate setting, but I didn’t get far enough to clarify this. A lot of Cod-Victorian British dialogue, a sister in a sanitorium reeling of prime numbers, murder on the campus, an innocent man erroneously charged with the murders. Gads sir, I should have put this lengthy story in Ellery Queen’s, or Analog. I mention Analog again, as I have a suspicion that of late there are stories getting into Asimovs under the newish editorial lead which wouldn’t have got there in years past. And with the addition of a letters page, and a science fact column, both of which Analog have had for some time, I would worry that the executives at Dell might decide that there’s too little difference between Asimovs and Analog to justify separate titles.