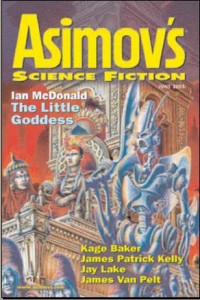 The (PDF) issue gets off to a strong start with the reminisences of a girl who has been the ‘Kumari Devi’, a Living Goddess. She remembers how she as a young child she was chosen, the bloodcurdling rituals, the separation from family, and the years waited on hand and foot, worshipped as a god, but only whilst she remains pre-pubescent. This early part of the story, with only a few references to the fact that we are about fifty years hence in Nepal, is unsettling and alien (assuming that most Asimovs readers are not Nepalese). As I’ve stated before, often such settings are more ‘alien’ than many offworld settings in poorer SF.

The sfnal elements come into play when the young girl, returned to her community, finds her next role in life is to be that of a wife. As soon as she is 14 she is betrothed to a Brahmin, one of the higher castes in India, who benefit from tweaked DNA, giving them twice the usual longevity, but consequently grown at half the usual pace. Her husband, aged 20, is therefore physically only a 10 year old boy, and the wedding night comes as a shock to her (I’m guessing here, but this may be the first SF short story to feature a strap-on?)

Following her failed marraige, she becomes involved in smuggling – not as a drug mule, but by transporting outlawed AI’s in her own skull. However, this becomes increadingly hazardous, and a final smuggling run, with a risky complement of 5 AI’s ‘on board’ sees her finally able to take a grip on her future, and to be able to become, in effect, a little goddess in her own right.

A powerful story, in which you can almost smell the ghee and feel the heat, evidently sharing some story elements with his very well received novel ‘River of Gods’ from last year, and which, on this basis, I may well choose to be one of the few novels I read this year.

In contrast to the post-Singularity upload landscapes of much SF, Kelly provides a stranger landscape. His ‘cognisphere’ is an AI-controlled environment, called Nowhere, and where less than a thousand re-constituted souls live their lives, contributing to the Memory Exchange. They are on a high piece of land, surrounded by fog and a great drop, although in the distance it is possible to see other checkerboard landscapes. Those who have been brought back to life have been chosen at random, and they struggle to understand to what purpose they are there.

When Lorraine Carraway is approached by representatives of the AI, which come in canine form, she realises that something very strange is happening. Her young lover, Will, has been working on his attempt at The Great American Novel, and this new creation has, it would appear, an important role to play. However, in giving up this work, and attempting to climb down from Nowhere, Lorraine is left to make sense of her world, which she is able to do through writing a story. Her story is, it transpires, that which we have been reading.

An intriguing and inventive story.

Further adventures of Alec Checkerland, young artisto of the near future, who is sowing his wild oats, as the youth of the time are evidently wont. I have to own up to pulling out early, partly as the story was reading fairly young adult/juvenile in tone and the AI with a piratical bent (down to the use of the word ‘lubbers’) grated. Also, it felt like a story written in the 1950s, which was looking forward to youthful behaviour, a behaviour which we have long exceeded in the meantime. But doubtless essential reading for those (not I as a rule) who enjoy Baker’s The Company series, of which this is part. My beef with The Company stories is that they feel to ‘easy’ – dumping well established characters in historic settings – and just doesn’t stretch the reader or the writer. Baker could write The Company stories till the cows come home, without really contributing a whole lot to the SF pantheon.

But I’m in the minority, as it appears a lot of people do like The Company stories. (Mind you, lots of people read Star Trek stories….)

A follow up to ‘Last of the O Forms’ (Asimovs Sept 2002) in which a mutagen is causing gross defects and bizarre mutations in humans and animals. Some twenty years in, with no human babies born in that time, humanity is eking out a living, either in farms in the country, or barricaded into urban settlements. The mutant animals take many shapes and sizes, but they are breeding, and have some human characteristics, and may be the future of the human race.

Keegan is using his ice-cream van to trade between the two, garnering ammo from the mutants in exchange for the cream they supply to make his produce. He has a cleft palate, and feels compassion for the mutants, although this is not shared by his fellow humans, and he is left with a choice to make as to where his future lies.

On the arid planet of Salton, a group of Christians are outside the city walls, erecting three crosses, re-enacting the Crucifixion. The local police object to this annual event taking place outside the city, but the Christians refuse to heed the command to return to the city, and deciding to spend the three days out in the open, which will result in certain death. The obstinacy of both parties lead to an impasse.

The story feels a little underdone – almost like the opening of a longer piece. As it stands it instantly sets up the conflict, has arguments on both side revealed, and then finishes.

As is the case in such stories, things prove tricky, in this case as Rekaya has evidently been set up to fail, her sexual proclivities flying in the face of local beliefs. Normally, in such circumstances, the Ambassador cleverly resolves the issue at hand, although here it transpires that she has abilities as a Rainmaker which enable her, through ‘psychotronic energy’ to speak to the planet.

At novel length you could make a subtle study of gender, politics, sexuality and a whole lot more, but in a fairly short story these topics are in your face from the start and quickly progressed, and, in this case, brought to a fairly arbitrary end. The issue of Rekaya’s sexuality isn’t really as big an element in the plot as it would need to be, for one thing, and ‘There was only one thing that the Foreign Worlds Service had not reckoned with—that Rekaya would prove to be a Rainmaker’ is w-a-y too cheesy for me.

McDonald and Kelly start the issue strongly, the Baker story felt a bit Harry Potterish, and the final three were OK but missing that something special.