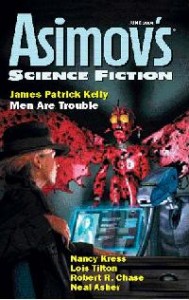 Originally published in 2000 in ‘Destination 3001’, published by Flammarion.

Earlier this evening I upbraided an Analog story for using a ‘transcript’ format for a story, and so to be consistent I should criticise this story on account of it being in the format of a dialogue between two characters. I don’t like this story structure, and it works even less in my opinion in this case as the dialogue consists of chunks of text much too long for a spoken conversation.

There is a double-whammy in that the story is an Alternate History one, looking back at military actions in Roman times and in particular the rebel leader Spartacus. To my mind such stories are really no more than historical fiction – OK maybe the author plays around with the reported events/figures, but then that is what happens in all historical fiction.

Asher is an author local to me, and one who I’d like to get around to reading sometime. The main problem is that his recent, well-received work is more in novel format. His ‘Snow in the Desert’ from the late-lamented Spectrum 8 was one shorter piece I enjoyed, and which David G Hartwell collected in his #8 anthology.

Asher provides us with a far-future off-planet scenario in which a young woman fleeing her gangster boyfriend finds herself facing his jealous revenge, but is saved by the ‘chance’ encounter with a post-human combat veteran. However, in stepping in to save the woman, the veteran alerts forces opposed to him to his presence, and a shoot-out on a ferry ensues.

As with the aforementioned ‘Snow in the Desert’ the story has a dramatic quality to it – that is to say, it comes across visually, as if Asher is crafting a piece of live action, rather than a piece of fiction. The story also feels, primarily to jumping in at the deep end at the beginning, and finishing immediately after the dramatic denouement, as being plucked out of a bigger work.

I enjoyed Melko’s ‘Singletons in Love’ in the Roc anthology ‘Live Without a Net’ last year, and this story is of equally high a calibre.

A young girl finds her trailer-park life turned upside down when an alien crash-lands in a VW beetle in a nearby stream. Looking after her brother, who has a learning disability, and avoiding the local bullies, whilst protecting the alien give her a challenging time, but the feisty girl has enought wit about her to turn the situation to her advantage.

Having had one transcript story in this issue of Asimov’s, finding a second one was a bit of a disappointment and a bit of a disservice to Chase.

Here we have the transcript of a conversation in which, as you might expect from the story title (although not without its twists) we have a potentially non-human AI and a very human human engaged in a conversation carried out on screen and via keyboard. The implementation of this technique fails in this story IMHO as the human just gets into way too much detail and description for anything remotely like a conversation-mode.

Worse still, some of the writing is just plain wrong for this kind of mode : “Then I left the warehouse, the dolly wheeling obediently behind me (my italics, and this sentence picked out at quick random).

Even worse still, I think there was a good story in there trying to get out!

Fantasy piece in which, IMHO, the sword could usefully have remained buried.

Interestingly it could well be a fantasy counterpart to the Asher SF story in being a short dramatic episode out of a larger piece, but on the basis I review and prefer SF as opposed to F I retain the right to exercise my discrimination against stories including swords, kings, hippogriffs, maidens etc. Bite me.

Following two stories using a conversational approach we have here a monologue in the shape of a journal hand-written by a geologist on Mars who is trying to trace a long-lost, famous naturalist. Enthused and driven on by the poetry of her predecessor the young woman finds she is chasing a ghost chasing a ghost.

My reading of this story started with a double hindrance. Firstly, I made the mistake of deciding that sitting in the only vacant seat on the train carriage was a better option than standing for the 45 minute journey. Normally a no-brainer, but in this instance I hadn’t realised that all the other seats in that half of the carriage were taken by 16-year old schoolgirls coming back from a school trip to London. Had they been in uniform I would have spotted it straight away and avoided the empty seat, avoided the carriage (and possibly even avoided the train). However, they weren’t in uniform, and so as I sat down I began 45 minutes of inane conversation about boys, singing, clapping, shrieking, yawning, giggling, more conversation about boys…

The second hindrance was finding that the last story in the issue was evidently in the hard-boiled detective milieu. Somewhat dispirited I kept my eyes on the book, studiously avoiding as best as I could the lame conversational gambits from the young ‘lady’ sitting opposite me.

In the end I gave up tried to make sense of the story, and waiting until today to read it properly.

The reason why finding the story was of the hard-boiled PI ilk is that as a rule such stories in SF magazines tend towards fairly banal humour and do very little for me. Fortunately, Kelly avoids such a convention, and actually goes to the other extreme, furnishing us with a story with a memorably setting and all-female cast (including the POV character).

Kelly’s background is a near-future Earth in which aliens have arrived and got rid of virtually 50% of the human population – the male 50%. A couple of generations on and society is just about the same as it is now, the economy not as good as it was, but with robots supplied by the aliens providing a wide range of support, things could be worse.

PI Fay Hardaway is (with the exception of her gender) straight out of central casting, nursing a Johnnie Walker habit, unlucky in love, and bemoaning the lack of business. However, when one of the aliens, through the services of one of the robots, puts her on a very good retainer to do a bit of missings person detective work, things start to look up.

However, as is obviously going to be the case, Fay finds that things start to get complicated – very complicated. Girlfriends, mothers, priests, cops, pre-alien and post-alien generations, alien ‘seeding’ pregnancies, suicide cults – Kelly puts in a heap of ‘soft’ SF in a story that to me feels more like a James Tiptree Jr story than one written by a man (and if your knowledge of SF isn’t sufficient to work out the sense of that last sentence then it is you who will have to do some detective work hehehe).

A veritable feast of Science Fiction, so much so I found myself checking the front cover expecting to have read a double-issue. Query : the Kelly story provides the inspiration for the cover illustration – rendition of the alien (referred to in the story as ‘devils’) is fairly reasonable, but the PI wearing a raincoat and hat is a bit naff, but what is the Dr Who robot K9 doing in the picture?