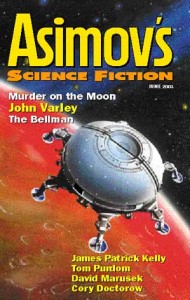 The reduction in the volume of Varley’s short SF output has been a disappointment to me. For a decade (1974-1984) he put together a very strong collection of stories, that prolific period being bookmarked at the end with the Hugo and Nebula winning ‘Press Enter’.

In this story, the lunar cop Anna-Louise Bach, returns to our pages. She featured in the notable ‘Barbie Murders’ from 1978, which was collected in Terry Carr’s Year’s Best Science Fiction of the Year #8, notable for its use of a merkin (look it up) as a plot device.

Varley sets the story off which a pregnant woman fleeing a pursuer, and by mistake ending up in in airlock and ending up being exposed to the vacuum of the moon and dying.

The claustrophobic lunar society, bustling with pregnant women (of whom Bach is one) is vividly drawn. The plot – pregnant women are going missing, to be found dead, their fetus removed. Bach is sent out to act as bait for the serial murderer, and she hangs out in a nudie-freesex bar.

Sure enough, Bach is successful in her role as bait – but rather too successful as she is captured and whisked away. The dramatic denouement takes place in a domed cornfield, with Bach, now in labour, fleeing for her life, and the life of her child. She manages to turn the tables on her pursuers, who it transpires have been ‘harvesting’ the unborn babies to meet the demand for those remaining carnivores who have found even veal no long satisfies their needs.

Varley has spent a lot of time in Hollywood, I understand, and the story reads quite like a SF thriller movie. Not a bad story, for its type, but not a Varley classic.

Actually, this story reads more like a Varley classic, which is no mean praise for a budding author.

Robert is an ‘Eye’ – some who connects to a tachyon stream whilst in a total immersion chamber, controlling equipment in deep, deep space, seeking life on other planets.

His job is one that carries a heavy emotional and psychological price, in that he is reliant on drugs to be able to engage with the ‘real world’. He is struggling to find his true self having ‘returned’ from his last trip, trying to avoid taking the drugs. Whilst out driving he meets a woman, widowed a couple of years ago, who is similarly trying to recover her true self.

The two find that between them they might be able to begin to meet their individual needs, although a final challenge awaits them before this can happen.

A great little piece of zany nonsense from Doctorow. Gun-toting alien dimension hoppers have lowered the tone of the neighbourhood, making themselves a pain in the ass, upsetting the houses, and all manner of stuff.

Anyhow, one dimension hopper gets captured by a couple of neighbours, who decide to meet the threat head on, and have great dimensional hopping fun before they finally make the neighbourhood a safer place.

When reading the rider at the beginning of the story “there are brief sexual scences in this story that may be disquieting to some’, I thought “only brief“?

The POV character is indeed Bernardo’s House AI, which is struggling to cope with the long absence of its owner. Something has obviously happened, both to Bernardo and to society as a whole, but the AI is struggling gamely one, even after two years.

A feisty young girl appears in the garden, and she and the AI begin to build a relationship, which ends with the AI coming to terms with the loss which she had been hiding from herself.

Person creates a very alien culture. In the middle of a desert a range of strangely dressed individuals gather on a regular basis to cook food, some performing native dances whilst they do that. All very strange.

And that’s just the humans. (Well, they are Texans). Put into this melting pot one of the aliens now on Earth, and things are going to kick off. Particularly when that alien isn’t playing by the rules – either their rules, or his rules. The cultures clash, and threaten inter-species harmony, but all is right in the end.

Daniel Abraham and Susan Fry. The Bird of Paradise.

In Mexico, a yanqui plague is decimating the Mayan natives. However, the older magic that is part of the fabric in which the Mayans live will prove to be stronger than the clever science of the Americans.

David Marusek. Listen to Me.

The author has been holed up in the woods working on a novel or two in recent years, and his loss to the short SF field is also to be bemoaned.

This is a little gem, although as with all gems, there is a flaw.

Halfway through a long, long space journey, cabin fever is setting in. The male protagonist is having difficulty with his female companion (his squeezie). Her behaviour has been becoming bizarre, vomiting everywhere. It turns out that she has an ear infection, which can be sorted quite easily. Once she is on her feet again, however, it is he who starts to feel the strain, as the ship passes the halfway point.

Tom Purdom. The Path of the Transgressor.

Davin Sam and his wife are part of a scientific team on the planet Itoko, studying the fauna and flora.

They are somewhat separated from the rest of the team, which becomes particularly problematic when they try to return from their field study to their local accommodation. Some of the indigenous mammals, who have until now kept away from the humans, show hitherto unobserved communication skills in encircling and attacking the pair of scientists.

The drama unfolds as Davin and his wife try to make their way back to the safety of their accommodation, trying to outwit and outblast the animals which are hunting them.

Help from the rest of the scientific team is problematic, due to political machinations. Furthermore, Davin’s wife is in effect some form of geisha, genetically modified to be observant and helpful, but to have little concern for her own welfare.

The story suffers a little from trying to do two things at the same time, which don’t quite work together – the straightforward drama of the battle with the animals, and the political/sexual politics side of the story.

A strong collection of stories.