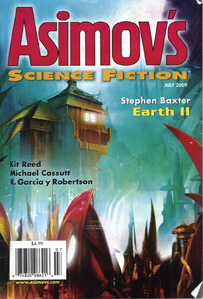 A story with several elements in it, which work to varying degrees. The Last Apostle of the title is the last man left alive from the select group who walked on the moon. As he approaches his final years, he reflects on his colleagues who were given the collective noun by a journalist, and the personalities of each.

There’s an element of alternate history to the story, in that there have been twelve men who have walked on the moon. The reason for this could be to get a dozen to match the apostles for the title to work, or to avoid the story having to refer to the actual astronauts who have worked on the moon. It’s not clear though why the last astronaut’s mission was Apollo 506, and the space program is largely the same as has actually happened.

There is one secret the astronauts have been keeping to themselves – the finding of some artefacts suggesting an alien civilization, or much, much earlier visit by humans. It’s a bit difficult to accept a discovery of such huge importance would be kept secret by the astronauts. In deciding to bring this finally to the attention of humanity, the last astronaut unwittingly identifies an evidently even bigger find : water ice.

The interpersonal relationships of the astronauts are the highlights of the story, the ageing astronaut looking back on his mission and the lead up to it also work, but the rest to lesser effect.

A very awkward teen finds himself on a remote island with his parents, and, worse still, therapy is evidently the name of the game. However, seeing his parents publicly exposing their inner selves to other camp members is the least of his worries, as there is much more at stake.

Nice enough story, but no genre elements (unless I blinked and missed one), and not one to trouble the Year’s Best anthologists.

A gentle riff on ERB’s Barsoom, bringing some more contemporary sensibilities to those from a hundred years ago. Fine as far as it goes, but Robertson at his best goes much, much further.

Ian McHugh. Sleepless in the House of Ye.

A first story in Asimovs from a 2006 Clarion West graduate. McHugh takes on the challenge of writing a story from a totally alien perspective – a tricky one to pull off successfully.

The trick with these stories is to provide enough in the aliens for the reader to engage with the protagonists – too alien and it’s impossible to empathise, not alien enough and they’re essentially human.

McHughs falls too close to the latter of these to be wholly successful. The crux of the story revolves on individuals having to make a sacrifice for the greater good, and the final drama, featuring a trek across an icy waste, only to find the hoped-for help is not there, works, although this reader’s minds-eye had humans in parkas very much in mind. There’s also the dissonance of having the story start with a made up word ‘Some of us will have to take koy‘, with the protagonists clearly different from humans, but followed by references to ‘crates in the storerooms’, and ‘loaded sleds with frozen and salted meats, dried fruits and sacks of flour and grain’.

A young girl has been railing against the role she as a girl is expected to have in her village. She has been trying to be as boyish as possible in her appearance and behaviour, but this appears to cease become an option when evidence of her being a woman is visited upon her.

She challenges the local shaman and male hunters to be given the chance to prove herself in the hunt, and like many young men over millenia, it becomes her against the prey in the dry dusty desert – only with the difference being that the dry dusty desert is outside domed Paris, and in this disturbed world the chase of man/woman/boy/girl/antelope shapes and reshapes and resolves itself.

Baxter appears to be writing less short SF of late, which is no surprise considering the volume of output he has at novel length. Here he provides a story set in the distant future of his Flood/Ark novels, with Earth II being the planet on which those who left the doomed original Earth, are establishing a toe-hold.

It’s a lengthy story, but you can imagine Baxter turning it into a length novel, with two or three perspectives, and a lengthy mission by one of them taken so far, then rapidly completed off-stage and reported back on at the end.

Probably more value to those familiar with the Flood/Ark stories, but some, as ever, interesting world-building and characterisation, and the most extreme case of sapphic coitus interruptus that you will ever come across.

Not the strongest of issues, a bit of a surprise considering Reed, Cassutt, Robertson and Baxter being on the front cover.