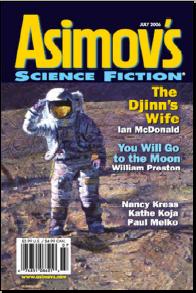 Clifford Falls being suburban America, to which several nano fabricators are delivered as this tech suddenly becomes ubiquitous. Young single mother Carol, her husband having run off with another woman, has less time for the free goodies that these offer than her neighbours. Her suspicions are proven correct when, with everything necessary being instantly on tap, there are suddenly few people willing to work – and the absence of teachers, nurses and police officers, are soon keenly felt.

It’s not just the ‘burbs either, as things start to fall apart in the cities as well, and Carol comes face to face (or face to another anatomical body part) with the reality of the breakdown of law and order, and subsequently joins a small group in a secure commune, which begins to develop the societal rules and roles for the new order.

The impact of this tech on a suburban family and community is particularly well-handled and effective.

William Preston. You Will Go To The Moon.

This will bring a lump to the throat of 40+ men who have lost their parents, as we follow one man coming to terms with his parents heading off for a retirement community on the moon, and realises he has also to give up those places which now existing only in the past.

L.Timmel Duchamp. The World and Alice.

An excellent piece, featuring Alice at many stages in her life. From her early days as a premature baby, through her adolescence and into her old age we see herself as she meets herself across the generations, time and again, and find out about how she came about, and see her continuing the pattern into the next generation. Subtle and affecting.

Sibling rivalry leads to attempted fratricide, as Marc desparately jumps from a harvesting machine into a continent-sized field of maize, to escape certain death from his bro Eli. Broken jaw, broken ribs, and with no chance of rescue, he could consign himself to a lonely death. But he decides to fight to the last step, manages to get sustenance (not from the corn, but from the bugs – bleh), and walks and walks and walks.

A movie buff finds, to his surprise, a video store in his neighbourhood. Turns out that it is from another Earth, poking out into our reality only for a limited, and reducing, amount of each time each evening. The store is choc full of movies – but movies that were never made in our history, or else made with other Directors or actors. As someone with a reasonable knowledge of movies, it appears that all of the alternate movies are things that did almost happen – such as Tom Selleck being originally cast as Indiana Jones.

This rather lets the story down, as, for my money, more free reign could usefully have been given to more intriguing and off the wall differences. Me, I’d have had Iggy Pop, instead of being a late 60s-00s singer, as an Eastern European emigre called Ignatius Popalovian, who joins Curly, Larry and Moe, to set up the singing comedy quarter Iggy Pop and the Stooges – him being the skinny one with no shirt and the long hair.

Teenage kids find that an unscrupulous character is harvesting precious stones from the skin of one of the indiginous creatures on the planet that has been settled by humanity, and decide to free the snail-like creature. An interestingly rare example of a story where the extra-terrestrial life is not on a par with humanity, intelligence-wise, and is as a result exploiting (it is and was ever thus on Earth of course!)

A short, atmospheric piece, with little in the way of SF, but more feeling and emotional resonance than you normally get in SF, and more poetry in its prose than in the verse which appears in SF magazine under the label ‘poetry’. A couple sit on a porch in the dark, there are words spoken and unspoken, and the nature of their existence is explored.

Set in the same near-future AI-heavy Indian milieu of ‘The Little Goddess’ (Asimovs June 2005), and the novel ‘River of Gods’, and equally outstanding. McDonald explores the unlikely relationship between an AI, A.J. Rao (who appeared in the novel), and a dancing girl. The AI has fallen for her, and she is flattered to receive the attentions of one such as he. But can true love really happen between woman and AI?

It appears that it can, with the pair relating both emotionally and, surprisingly, physically. But he is an AI who can incorporate many instances of himself, the better to multi-task, and of course a woman can not share a man with others in this way. For her it is all or nothing, and as the rules are changed to make such powerful AI’s as he illegal, she has to choose between him and the Krishna cop who wishes to turn him off.

For me a -much- stronger issue than the previous one, which feels like it should be a double-issue, as so much quality is squeezed into it. The more experienced writers provide quality of the highest order, with Preston, Kosmatka and Pratt just a slight bit below that standard.