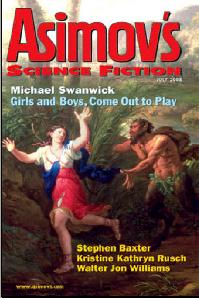 A professional photographer, courtesy of some hi-tech kit and a run in with a bolt of lightning, finds that he can communicate, via the digital camera, with an alternate dimension. Not only that, but he is able to communicate with his long-dead sister, who in this other reality is the one who survived a boating accident when they were children.

However, it transpires that such communication is not unknown, although frowned upon by the powers that be.

The story struggles a bit with the tempo, enforced by the means of communication (morse code from his digital camera, and laptop messages back from the other realm), and the technie bits are somewhat overdone in places. The story just generally comes across as being by someone not used to writing SF who has come up with an idea but hasn’t quite been able to turn it into a really good SF yarn. The story ends with a double drama (religious colleague burns down the equipment/MIB chase the photographer down) which is one too many!

Michael Swanwick. Girls and Boys, Come Out and Play.

Further adventures of Surplus and Darger, cunning coves purporting to representing the British Government of the future, which has seen better days. Herein they find themselves in Greece, attempting to obtain ‘stolen’ treasures (the Greeks have got revenge for the Elgin Marbles). In so doing they come across a team of African scientists who experiments with pheromones drives local villages, and our erstwhile heroes, into a frenzy of rampant rogering.

As is the case in these tales (the novelty of which, it has to be said, is beginning to wane), Surplus and Darger come out on top. Next stop Byzantium.

A counterpoint to a number of Baxter’s stories which feature humanity spreading out throughout the Universe over the millenia and gradually changing to suit their environs, and others of his stories which have seen humanity make enforced changes to survive on a changing Earth. Here we see short episodes in the lives of several children, separated by aeons, as humanity barely changes, whilst Earth undergoes changes through fire, ice and tectonic changes. The omniscient narrator is present throughout, which doesn’t really work for me in this case (ie we don’t really need to know that a particular river used to be known as the Seine by previous generations), and to me the lack of change in humanity (the key point of the story) doesn’t quite ring true – I much preferred Baxter’s vision of humans taking on penguin-like characterists (‘Huddle’ F&SF May 1999).

A bit of retro SF – replace the frontier town of Riverton on the planet Mendoza-4 with a small township in what used to be called ‘The Wild West’, the indiginous Skulks with Native Americans, and the local Marine base with the local US Cavalry fort, and you have a story which could have been written by Louis Lamour. When the skulks turn nasty and threaten the local townsfolk, the young girl barber has to ride faster than she’s ever ridden before, in order to get help. Can she get to the Fort to summon help, and return to the arms of her new found love? Or will Toby have to take it on the chin like The Duke, and walk off into the sunset to the tune of ‘My Darling Clementine..’

A page into the story and you know you’re in the hands of a very classy writer. The story starts with Paula, a 15-year old girl enjoying her summer – playing tennis, going swimming. However, something is not quite right, and Paula and the reader are brought back from her high school memories to the current day, with Paula old and frail, and undergoing a form of reminisence therapy aimed at ensuring our final days are spent fondly remembering the halcyon days. However, Paula has always felt that the best is yet to come, and refuses to slip into a dotage which looks back on past events.

In contrast, a first published story from a Clarion West 2001 graduate. Ling updates an ancient Chinese fairytale about Chang-er who sleeps forever in her Moon Palace, accompanied by her jade rabbit. A young girl who is very sick offers her the opportunity to return to the real world. OK in its own gentle way, although relying on an ancient fairytale doesn’t give the writer that much opportunity to put that much of herself into the story.

Friend’s first story in Asimov’s ‘Christmas Tree’ (Dec 2004) was inventive, as this one is. This has a deep space setting, and explores the strange symbiotic relationship between humans and spacefaring race, which we know as The Picasso, which discovered us and has taken up into space with them. Jayk and his Picasso, Flegg, arrive at an artefact in space, a relic from a previous era of spacefaring by the Picasso. They meet up with three other ships, and start collecting valuable objects from the artefact. However, things go wrong, and the nature of the human/Picasso relationship is clarified.

The author handles the story and characters (both human and non-human) neatly, to make an enjoyable story.

The central, scary conceit is given to us straight away – spaceships travelling FTL through navigating ‘skipspace’ with the aid of a human feotus wired into the navigation system. Maybe the editorial intro referring to Vick’s comic book background planted the seed, but his opening scene feels like a comic book – you can picture the layout, and you get the background explained in a way which would work better in a speech bubble than it does in the story : “”We didn’t even know about it until a pregnant woman was off Earth” (crew members are hardly going to need to explain this kind of thing to each other – it’s something which can be handled otherwise in a story but which does need spelling out in dialogue in a comic).

Earth has been destroyed, and the skipship Hope is desperately trying to find a habitable planet. With dwindling supplies, their predicament worsens when their on-board foetus dies, and the ship’s doctor has a dilemma, as their are only two pregnant women on board who can supply the needed replacement, and she is one.

The story doesn’t have the length to rack up any tension, and what there is dissipated (having had a conversation between the doctor and the other pregnant woman, with the latter refusing point blank to co-operate, we are simply told a couple of paragraphs later that she has changed her mind). As with the opening, there are visual descriptions which don’t fit in a story which would clearly fit a comic better : “Farther, farther, and the water streaming from the tap kissed the top of her head. She stayed in position for a moment and then straightened to let the water cascade down to her shoulders, her back, her chest.”

Not up to the standard of William Sander’s ‘Heart of Glass’ from Asimovs a couple of years ago, which similarly explored the sacrifices humanity has to make to get into space.

Rusch and Friend are the pick of the bunch for me, with the rest missing that little something special.