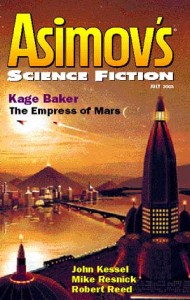 John Kessel. Under the Lunchbox Tree.

The third story in the Lunar Society of Cousins setting, which, we are told, Kessel hopes to see together in a book – whether as short-stories or a fix-up isn’t stated.

The setting is a matriarchal moon, in which men are reduced to little more than sex objects. My main issue with these stories is that the simple reversal of male/female roles is rather crude, and somewhat unlikely. I would prefer a more subtle exploration of how society and individuals will (and is already) diversify in the future, as opposed to a simple conceit that could be from a story from the 50s.

Unlike the other lengthier stories in this series, this is a much shorter vignette, in which a young girl at camp pulls a fast one to get out of the athletics activities. Like many little girls, her head is full of horses and dreams for the future. And that’s pretty much it, other than a brief pause to think about no matter how miserable she is, it would be much worse if she was a boy.

A master-class in story-telling and Alternate History. The story-telling is exquisite, and up there with the best. The protagonist is a young teenage boy, and we see a few weeks in his life as his father enters politics.

The Alternate History is subtle, but also well-handled in the way it is integrated into the story. Bits and pieces are learnt as the story progresses, and it is the fact that the story is progressing rather than the AH which carries the reader along. To summarise the AH would almost seem an injustice, but suffice to say that the setting is a Roman Empire that has lasted to the 20thC, but in a diminished form. What Reed does very, very cleverly is use a civilisation-type computer sim to show how our reality is a strange one to those in the story.

Another well-written story, and Resnick manages to cover well-trodden ground (somewhat redolent of Asimovs’ Bicentennial Man), and to avoid (just!) being too oversentimental. A robot is found who has been doing his duty to ‘little miss’ for many, many years. The robot’s humanity gives pause to thought to the erstwhile salvage merchants who have found him, the interplay between these two characters of which gives another dimension to the story.

A Westerner, Masterton, is in the latter stages of terminal cancer. With traditional medicine no longer offering any chance of salvation, he finds himself in Morocco, hunting for a rumoured cure. He finally bullies his way past the small, remote community which is hiding the source of the cure, to find that it is an alien cure – a crashlanded spaceship, which offers him hope. However, as with all horror stories, there is a twist in the tail, for the recuperative powers of the alien vessel are not at their peak, and the greedy Masterton has little compunction in committing murder to heal himself. But, of course, his cure is not what he had envisaged.

A shorter short story, very much mainstream horror, as opposed to SF. An ex-Nazi is haunted by the ghosts of the past.

Kage Baker. The Empress of Mars.

The longest story by far in the issue.

A British terraforming project on Mars is the backdrop to the story of a very resourceful woman of celtic persuasion who overcomes several obstacles in her path to rise from a humble bar owner to a much more esteemed position.

I have to admit to not getting engaged with this story at all – it came across as just a little too forced to me – lots of colourful characters, language, incidents, whimsy and so forth, but not enough at the core of the story to sustain such a length. I ALSO DON’T LIKE TO READ LOTS OF SHOUTING IN STORIES! which happened at the end, and added to the feeling of being somewhat inundated. The larger than life characters actually get in the way of an interesting piece of world-building.

Reed and Resnick the picks for me, but other than those two nothing really grabbed me.