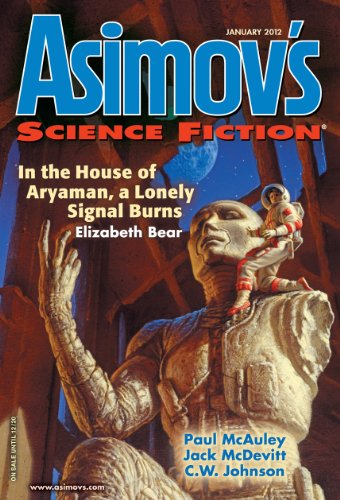 First published story for Marzinsky, a short (just over 1000 words) one in which a robot follows its programming. Fortunately.

Not a whole lot to get a hold of, reviewing-wise, with perhaps a comment that the author strains just that little too hard style-wise.

A young man, socially awkward, finds that having run out of the money to pay for a professional Friend, he is reliant on his own limited skill set for interpersonal communications, in a world were those skills are prized, and public. However, in returning to his childhood home he stumbles upon someone who puts him back in touch with himself. The story zips through quite quickly and fairly obviously.

A story learning towards the more scientist fiction that you get in Analog than is normally the case in Asimovs. C.W. Johnson is a professor of physics, and the story does get just a little too technical than is ideal for those of use not really interested in too much scientific detail. The story features a graduate student doing research for a senior professor, and takes forward her scientific analysis alongside a health threat to her partner, and the stresses of doing said research, both professional and personal.

Zachary Jernigan. The War Is Over and Everyone Wins.

I criticised the last story I reviewed in this issue of Asimovs of being too much in the Analog scientist fiction mode, whereas this is more typical of the softer socio-political Asimovs story that draws me to the magazine.

A family visit home by a young man after his grandfather’s death is the event around which the story pivots. Not much happens, other than interactions between him and his relatives, notably his father, but it is the background that fascinates, one in which race is still very much an issue in the near future, albeit with one major player in that complex puzzle removed from the equation.

In McAuley’s Jackaroo series, a young man finds himself setting out on the beginning of a great adventure, hooking up with a woman who takes him for a walk on the wild side, but it’s a relationship that’s born to lose, as she ends up being shot by the sheriff, and he’s busted, and with only 25 minutes to go, he’s a dead man walking.

Well, having gotten that opening sentence out of my system, let’s say that this is a clever story, set to the driving rhythm of Bruce Springsteen, as a young man falls for an adventure that is laid out in front of him. On a planet far away from Earth, his new lover takes him for a ride (literally) and as the story progresses we find out just how ill-placed his faith in her is, and just how amoral he is in seeking out a new future. The story flows nicely, and ends up with a thoughtful consideration of narrative and storytelling, and of humanity’s lack of understanding of the story that is being told.

Elizabeth Bear. In the House of Aryaman, a Lonely Signal Burns.

A locked-room murder mystery in near-future India. The investigating officer is a complex character, and the story has depth, physics, astronomy, First Contact, cloning, and a talking cat. What’s not to like?

A couple of strong stories, a couple of weaker ones.