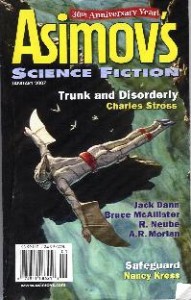 A classy piece of writing from Kress, who cleverly intertwines story and backstory to reach a shattering denouement.

Three young children are being ‘raised’ in a small habitat, with only a minumum of human contact, and the humans they contact are biohazard-suited. We find out that they are in some way a genmod menace developed by the enemy, and it is only by an act of compassion by the US government, argued for by their human contact, Katherine Taney, that they have been kept alive.

When an earthquake damages their habitat the young children are able to see the wider world, stepping out of a climate-controlled dome in the desert in the middle of nowhere. We see their sense of wonder in all that is new, as they struggle to make sense of the bigger world, and after being helped by a couple who find them on the road, we soon see just what a danger they are to humanity. Katherine is on their trail, expecting them to have died in the desert, and when she accidentally happens upon them, sans biohazard suit, she knows that all is lost for those in the neighbourhood.

The chilling nature of their genmod is revealed – they pass on a fatal virus to all caucasians. However, Katherine spots a way that their menace may be counteracted, and may enable them to survive.

Smooth rural mediterranean magic, in which a young boy, an American in Italy, whose summer days are spent hunting the small local lizards, believes that one of the old women in the woods is responsible for the death of his pet cat, and that she is a witch. He is correct in his assumption, but whilst she has killed something he has loved, it transpires that his hunting of lizards has been having an effect on her of a more intimate nature than he could have guessed.

A near-future US in which suicide bombers are making their presence felt – bombers of various backgrounds and religious persuasions. We see three perspectives on this : Leo Malkin, who likes to take a coffee break at a cafe near his flat; Ikrima Margalit, a muslim boy who Leo passes in the street and who is on his way to detonate himself at Leo’s favourite cafe; and Ikrima’s mother Dafna, who is transpires is Leo’s cleaning lady.

In a shortish story Dann gives a peek into the minds of Ikrima and Dafna, and their motivations. We find out a little about Leo, most relevant being that his wife has walked out on him for another woman, but it comes as a surprise that when he releases who the boy is and catches Dafna at his flat, that he takes the suicide jacket that she has been planning on using herself, and heads off to wreak a revenge on his wife and her partner.

I suppose the story is highlighting that anyone can be a suicide bomber, but I’m not sure what Dann is trying to say, other than we may be facing a future in which such actions are commonplace. Certainly the suicide bombers on London Transport in 2005 showed that otherwise perfectly normal, unremarkable people can blow themselves and others up, and there are on average 50 Iraqi civilians dying each day at the hands of a seemingly never-ending procession of suicide bombers.

A big treat of a story, with a richness to it that makes it stand out. A tight story in terms of setting and characters, all well described and rounded. Masafumi is a recently arrived Japanse immigrant tattoo artist working in the tattoo parlour owned by his boss Ignazio.

Harumi Ishii is American-born, with some Japanese blood in her, a dreadlocked beauty who comes to the shop to apply pictures to tofu which is served in the restaurant in which she works. Masafumi is shyly besotted with her, and when the chance comes to help her, through diverting the unwanted attention on her from fat private cop Walker Ulger, he sees it as a way of getting closer to her.

The revenge is where the technology (if not the SF) comes in, as Ulger is keen to have a special kind of nano-tattoo, and Masafumi duly obliges him, inscribing intricate patterns on his neck and arms. Double-crossing on the deal to leave Harumi alone, Ulger heads off to her restaurant, blissfully unaware that his clearly visible tattoos that are Japanase words that will go down very badly with the Japanese owners and diners in the restaurant. Very badly.

However, whilst he has freed Harumi of the unwanted attentions of the private cop, it is only to free her to find her future with Ignazio.

The dialogue, characterisation, and simple but effective story all impress, with the only fly in the ointment being that the sfnal elements are so minimal.

A short dark piece on warfare, with a grunt in a foxhole getting up close and very personal to a talkative, chess-playing enemy cruse missile, with his superiors posing more of a risk to him than the enemy.

Some quickfire drama, as a female ranger who uses robotic decoys to trap hunters who are going after ‘prey’ off-season, finds herself being shot up by a drugs cartel, and has to relay on said robotic assistants to help her out of a fix. No real sfnal elements, and it felt a little bit like an episode of Dukes of Hazzard.

I do often take umbrage at the occasional SF story that pops in some cod-Britishness, what what, but this is somewhat different. It starts off a bit 1930s British movie : “I want you to know, darling, that I’m leaving you for another sex robot – and she’s twice the man you’ll ever be!”

As an opening attention-grabber, that’s pretty good. The recipient of this message is Ralph, who is more of a squishy than Laura, the robotic clankie, who is doing the door-slamming on him, and we’re straight into a P.G. Wodehouse story set in the future. Ralph is Bertie Wooster, his butler is Alison rather than Jeeves, and there are maiden aunts, eccentric uncles, and a very strange set of coves with whom Ralph spends his ample leisure time.

Stross keeps his humour on the right side of the line for me – not too broad too often (one wincing play on words), and with an entertaining set of characters, including his sister’s miniature mammoth, and keeps everything in Wodehouse mode throughout, with a bit of drama, fisticuffs, and Ralphie getting the gal back, although with Fiona/Jeeves rather fading into the background as the story progresses. Conclusion.

Kress, Morlan and Stress are the pick of a strong issue.