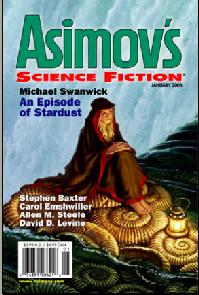 R.R. Angell. In the Space of Nine Lives.

A ‘new’ author, who has made it to Asimovs much more quickly than many, about whom you can find out more at http://www.rrangell.com. The intro to the story states that he is interested in “deep space exploration, nanotechnology, renewable energy sources, fish farming, manufacturing, psychology, sailing, cooking, telemedicine, and new product development”. Well, I reckon he’s got enough there for a career of shorty story writing!

He covers two of these in this story, looking at the psychology behind deep space exploration, with a third factor, VR, in a story of the kind Asimovs does particularly well, and which Angell handles particularly well for a novice writer.

Tom is a boy on a spaceship, his main company being virtual friends of his own age, his only ‘real’ companions the ship’s cat, and the ship’s pilot. The titular nine lives refers not only to the cat, who is on its nth re-incarnation on the starship, as are both Tom and the pilot, for they are decanted from the ship to crew it as the ship makes it centuries long journey through space. The pilot is training Tom, a clone of himself, who will (or rather, who should) do the same when it is time for the Pilot to ‘retire’ and for him to take the place.

Tom challenges the rigid role set for him, with a bit of Brokeback Mountain friendship going on in VR (referred to as ‘stim’ as opposed to ‘sim’ – I may have missed why, but it jarred whenever I came across the term). In due course Tom finds out the exact nature of his true self.

A good Asimovs debut for Angell.

A non-Coyote story from Steele, with tones of Asimovs/Arthur C Clarke. The scientist who played the major role in creating an AI which has now achieved an almost transcendental state, and is assisting humanity in millions of ways, regrets his so doing, and attempts suicide. Surviving, he is forced to face up to his resistance to the benefits which ‘Alfred’ is bringing to the world, but is presented with an opt-out solution to the modern world. In doing so, we hear from Alfred, who comes across as a mix of the namesake butler from Batman, and 2001’s HAL.

An OK story, but for me it could have been an Asimov/Clarke story from the 60s/70s and felt much more like the kind of story you tend to get in Analog.

A story in his Xeelee sequence, in which a small team of humans come closer to the enemy ‘Ghosts’ than ever before. Not only that, we are treated to some boggling Baxterian physics through which the exact nature of the ‘Ghosts’ is revealed to us. He touches on a ‘huddling’ response to climactic change, as he has done memorably before, in describing the evolution of the symbiotic collection of creatures which form the aliens.

An intriguing addition to the mileiu, although if you are not familiar with the Xeelee stories you will get a bit less from the story as a result.

Michael Swanwick. An Episode of Stardust.

In his successful ‘Darger and Surplus’ setting, although this cautionary tale of a cunning fox and her accomplice doesn’t quite reach the heights of the earlier stories.
whoops : Michael Swanwick advises me that far from being a ‘Darger and Surplus’ story, the story is in fact in the sequence which has included ‘King Dragon’/’The Word That Sings the Scythe’. You really do rely on the editor pointing this out to you in cases where it isn’t crystal clear from the story itself!

Carol Emshwiller. World of No Return.

An excellent piece of writing. One of the last of a group of aliens, stranded on Earth and forced to live amongst us for much, much longer than they planned, is struggling to keep hold of what he is/was. In helping out a frail elderly woman he finds some comfort, to the extent that when he is finally contacted by his fellow aliens and offered a return ‘home’, it is not such an easy choice.

Relatively near future in which Levine posits one of the last franchises of a hamburger chain (hmmm, I have an inkling who he may mean, but he’s much too subtle about it to be absolutely sure). A grandfather is giving his grand-daughter a tour of the States, not something done due to the high gas prices and the fact that the omnilink has removed the need to step outside of the house for most things. His mourning the loss of what he had in his youth, and his grand-daughters rejection of what is on offer to her, are neatly handled.

A story which, in a few months time I will probably swear appeared in F&SF, for it is very much the kind of story at which that magazine excels – ie beautifully described, populated and characterised, and with only a smidgeon of the fantastical. Set in the 1930s in the dustbowl depression, a young boy and his family await the rains – do they have the ability to call down the rain upon their farm? Well structured, with the retrospective view on events giving an added piquancy.