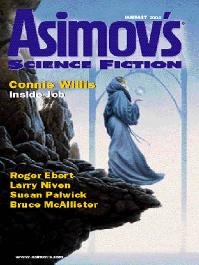 Hmmm, the first post-Dozois issue. Having to cope with that change alongside the Interzone change, don’t these people realise that a high proportion of SF readers are borderline autistic, and can’t handle change very well?

Susan Palwick. The Fate of Mice.

The mouse in question is Rodney, a lab mouse. But not your common or garden lab mouse, as he has an IQ boost and a vocal synthesiser, which enable him to establish a relationship with the scientist’s young daughter. Rodney’s worldview is of course limited, although he has strange dreams, and, inexplicably is aware of the place of meeses in our literature – from Cinderalla to the sfnal eponymous mouse in Flowers for Algernon.

He dreams of being free, but the scientist has warned him of his likely fate – mouse traps, and cats and other horrors. However, young Pippa has his best interests at heart, and he is freed on the doorstep of the lab.

Stroppy heir to Mullins’ Planet sets up with some trailerpark trash and heads off to the planet whose name he shares. Top of the planet’s food chain are the AxeBeak’s, large and vicious parrotlike creatures who can be charmed by poetry. Armed with ‘The Ballad of Abdul Abulbur Amir and Ivan Skavinski Skavor’ committed to memory, he loses track of his partner, who has been seeking her children, previously taken into welfare care and despatched to the planet. One of the weaker stories in Asimovs for some time.

Young sailor Veryon is smart enough to outsmart the two mermaids who have plans for him, in a short tail.

A tale of love, betrayal and politics in the cold outer reaches of the solar system. A young man has been fooled by a posthuman in a very attractive housing, and his small community are being used as unwitting stooges as discrete communities of humans and post-humans politick against each other. The pilot of Licensed Damager One in Hand closes on their very basic vessel, and should find his superior armaments enable him to prevent the act of desctruction the posthuman is planning, However, the infatuated human guy proves resourceful, and it is a close thing.

Tight drama against an interesting background.

A four pager in which a young boy exploring the river shallows finds some very alien aquatic creatures, and what he does haunts him as an adult as he brings up his own children.

The major fiction contribution in this issue, in terms of size, if not sfnal content. Rob is a psychic debunker – he spends his time, with this glamourous Hollywood helper, debunking the psychic fraudsters who specialising in separting the gullible from their money through pretending to make contact with the spirits of the dead.

They are intrigued by one such fraudster, whose seances/summonings are being interrupted by a second spirit. And bizarrely, the second spirit appears to be that of a famous debunker from the past.

Rob explores all options but (sadly for the rationalists amongst us) can come to no other conclusion that it is a bona fide spirit which is debunking her.

Not a particularly strong issue. The Jennings story reads like an Analog story, Palwick/Niven/McCallister are fairly lightweight, the Willis story could easily be an episode of ‘Moonlighting’, and only Jarpe providing thought provoking SF.