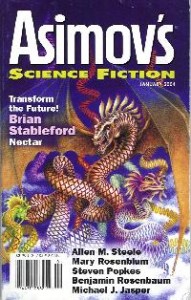 The teens are typically an awkward period of growing into adulthood, but for Sara the problems are compounded by the fact that she has eight parents (four couples) on her case. She has a plethora of parents as in this near future setting children are becoming increasingly rare commodities, as longevity (this is part of Stableford’s ’emortality’ sequence) has necessitated a reduction in birthrates.

Getting a tattoo remains a rite of passage, except that the digital tattoos in fashion are far more sophisticated an interactive, and Sara’s choice, a rose, integrates cleverly with her smartsuit. Her rose was intended to attract virtual Hummingbirds, but she is in fact pestered by darker shadows, and her tattooist refers her to a very elderly colleague, whose genetic manipulation on said bats has gone beyond the regulations.

The elderly tattooist, The Dragon Man, dies, but in his leaving ensures that his funeral is a glorious digital tribute to his skills.

New writer Rosenbaum has hit the ground running, and this story is an excellent addition to his growing collection of stories. He succeeds in a short piece in building an imaginatively different society and in telling a story – not something that is that easy to do.

Young Vru attends aged master godcarver Khancriterquee, who is concerned that his ailing flesh will necessitate him passing on his memories. Such a passing on of skills is done through a symbiotic biological transfer – Ghennungs are small creatures which contain memories of forebears, and the rich will have several creatures on their body, and consequently benefit from the wisdom of their predecessors.

Vru is singled out for the honour of becoming the next godcarver, and duly creates a wonderful new God. But his radical concept does not fit with the cunning Khancriterquee, who wishes to ensure that his own skills and knowledge will dominate those of the person who takes on his Ghennungs.

Vru pays the ultimate price, having his Ghennungs removed and thus become little more than an animal.

Abrim, aided by his ship AI Miriam (cloned from his DNA) finds a C-type asteroid, which should bring in sufficient money to cover recent financial problems. However, his brother Shimon turns up in his swanky new spaceship, rueing his bad luck in the asteroids he has been chasing. He is playing high stakes, having borrowed the money for his ship from the kind of sources that you generally don’t want to be in hock to if you aren’t finding high-quality minerals in the asteroids you are mining.

However, Shimon’s problems are more deep-seated, as he has been off-planet for much longer than Abrim had realised, and he falls for the lure of a siren-song on an asteroid that has captured other asteroid miners and which, without his AI Miriam, will ensnare Abrim.

Another installment in the Coyote series. Imagine an episode of Bonanza based on Bridge Over the River Kwai and there you have it. This story series could go on as long as The Waltons.

A story of dark magic across the generations, in which a tantalising glimpse of part of a long battle is given, through the eyes of two generations of a family which emigrated from Ireland to the States, and a strange book of magic, one of several volumes dispersed to avoid falling into the wrong hands.

A not-too-distant future in which some kind of viral plague has rendered people unable to read, and in which society has withdrawn on itself, into small enclaves. Lem, a young man acting as a bodyguard to the elderly farm owner Mr Hibbert, takes a trip with his brother and Mr Hibbert to a nearby town. Lem finds out a lot about the elderly Hibbert (v-e-r-y elderly Mr Hibbert), about his childhood and his parents, and, shatteringly, about his brother.

A strong start to 2004, with all but Steele providing superior quality IMHO.