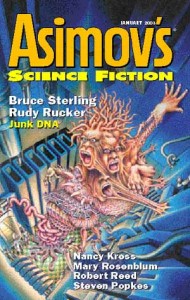 An eminently accessible, enjoyable story, looking at a cheesier flavour of cyberpunk. It is particularly pleasing to see Sterling still producing some short SF alongside his more regular (and presumably better-paid) punditry (punditration?).

The story starts in old Silicon Valley, introducing us to Janna Gutierrez, who manages to get through UC Berkeley with a degree in computational genomics. An otherwise nondescript life changes when she meets Veruschka Zipkinova, fresh from Russia with an attitude that proves to be irrestistible.

Veruschka has a novel product – a Pumpti – not a clone from her DNA, but a creature from her junk DNA. The blobby thing, marketed properly, gets the girls a foot on the dot com ladder. However, they are not business-minded, and soon, as is often the case, Big Business comes to their ‘rescue’.

Frustrated at what they get out of their hard work, the girls plot an evil Pumpti-related revenge on the two business men who have bought them out – with dramatic results (see cover!).

The idea that humans can upload themselves into a virtual construct has been covered with regularity in recent years. This story manages to be a bit out of the run of the mill, partly as it ties in with the choice so to do being made by a young girl in a state of extremis as the island she is working on is about the overrun by the sea.

The intro to the story gives rather too much away IMHO. A shortish story in which First Contact is an occasional affair, with us on Earth not having much say in the relationship.

Nancy Kress. The War on Treemon.

Halfway through this story I felt it was getting a bit heavy goingand checked back to see who had written it (my memory has been notoriously bad for many years). It came as a surprise that it was Nancy Kress.

Warring factions have their heads knocked together, metaphorically, by The Servants of the Peace, who use a quite bizarre method (xeno-cardiac transplants) to force one of the sides to confront their rigid prejudices. Kress gets into a lot of moral issues that are timely, but it gets rather muddy and heavy-handed, and the surrounding framework is a little like the old western movies – building facades quickly thrown up to create a main street in which the action can take place.

Another timely story, in which a city under continual terrorist threat resorts to the technique used in mining centuries back – a canary to spot danger. In this case a young man is met by a beautiful woman who goes to great lengths to expose herself to any dangers he may pose. If only all Customs interrogations were like that!

A cloning story with a twist. The twist is that the story is almost entirely story, rather than a lot of techie-stuff about DNA cloning. A young man finds out that he is a clone of a famous ice hockey player, which is particularly worrying to him as he is an excellent ice hockey player himself. Is he no more than a duplicate of his biological father, as opposed to a person in his own right. The story takes us through a couple of decades as he struggles to answer that question.

A strong collection, with only Kress failing IMHO to live up to her usual standards.