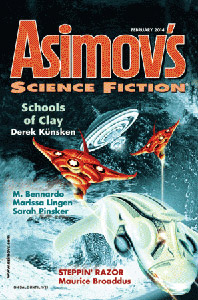 Set in the same/similar world to his ‘The Way of The Needle’ from Asimovs March 2012 (review here) – that world being a metal/mechanical crablike race of creatures, harvesting minerals and other materials from the planet’s surface.

Kunksen relates in parallel two elements of the story – alien attack, causing the creatures to take to space to survive, and the preceding industrial unrest.

But this time around I found it jarred a little more – there was too much straight from human experience in terms of the class system, the ‘landlords’ and ‘tax collectors’, the discussions around the proletariat etc. There was a lot of invention in the geology and chemistry of the world in which the story was set, and perhaps not a corresponding amount of invention in the other elements.

A couple of issues ago I railed somewhat about Henry Lien’s ‘Pearl Rehabilitative Colony for Ungrateful Daughters’ from Asimovs Dec 2013 issue, for its focus on teenage angst, and my lack of connection with that, due to the four decades since I was in that territory.

Here we have a story with the same setting (China) and some of the mannered culture of that society. But the story features adults, and it’s much more to my liking. King looks at the impact of the one-child policy and the consequences of men outnumbering women, with a society whereby it has become the norm for women to have multiple husbands. Pity then the male suitor, in this case Wei-guo, in his forties, and as fit as a fiddle, but only just getting his chance to present his wares to a putative bride, via her two existing husbands.

The first half entertainingly portrays the interplay between the pair being matchmaked, her two husbands, and Wei-guo’s two fathers. They are all well-drawn, and the dialogue flows smoothly.

The second half of the story features what was intended to be a clandestine meeting between the two potential lovers, which goes far from plan as far as Wei-guo is concerned, but King brings in a very human element into the story, counterbalancing the nuances and formal processes of the first half.

A story that has a retro feel to in a variety of ways, not always good.

Oxford Brown elects to engage the services of AfterLyf as he approaches his final days. This means that his mind will be scanned and he will be upload to a virtual afterlife – where he will join his beloved wife, who predeceased him, and who he sorely misses.

Duly uploaded (spoilers ahead) he seeks his wife, who has chosen to hide in the strange virtual afterlife, rather than to be there to greet his arrival. Oxford struggles with the virtual world, which just feels a little like one that might have been imagined a decade or two ago as it feels rather old-fashioned.

Traditionalist Oxford eschews a lot of what is on offer, to seek out his wife who he duly finds. There is a revelation about his wife, who is spending her afterlife with another woman, the woman she loved from college days but for whom any relationship was not an option due to the social mores at the time. Oxford was clearly not her first (or main love).

All fine and dandy up to this point, but then the wife chooses loyalty to her husband and is willing to leave her partner to take up with Oxford, to in effect do the honourable thing. And it is left to the magnanimous male, Oxford, to decide that his wife should really spend eternity with her true love, not with himself. Which really made me wince a little…

It’s August 1974, as the title says, it’s the last day of opening for the Ice Man Cafe, named after the owner, Ulno, who is in fact a hunter/gatherer who spent several thousand years frozen in a crevasse, and who has been running the cafe after fighting in Vietnam.

The reader has to be willing to accept this scenario, those wanting details bio-chemistry and scientific rationales for his being defrosted compos mentis, and those wanting the backstory as to how he integrated into society and joined up will have to wait for a prequel.

Essentially the story is about Janice, and her on-off relationship with Ulno, and how the pair of them, with another woman, spend the afternoon in the mountains, what happens, what doesn’t, and the whys and wherefores.

The story is nice enough, and probably would be better still by taking the ice man element out, and just having Ulno as a damaged veteran with an interesting childhood upbringing, as a speculative fiction readership are likely to be having questions in the back (or the front) of the mind whilst reading it.

FWIW IMHO if I had been editor, I’d have asked for a name change for this story. Firstly, as I’m not a big fan of long story titles. Secondly, because long story titles like this tend to flag up humorous stories, and this story isn’t funny (fortunately, it’s not meant to be funny!). And thirdly, once you twig (if you’re British and you twig things, not sure what other English speaking countries use – cotton-on?) that it’s not a funny story, you realise that the story is in fact about trans-dimensional horsemaster rabbis of Mpumalanga province (except that they’re not all rabbis).

As one of the characters (an off-screen character, off-screen on account of his posthumous nature) is a photographer, Pinsker uses the sometimes-used (as opposed to oft-used) technique of interspersing descriptions of photographs by way of breaking up the narrative. Again, not the biggest fan of this.

But having said all of this, I can say I did like the narrative. Following the death of her fellow-photographer/photo-journalist husband, Yona heads off on an assignment into South Africa. There’s mystery about it – upon arrival at Jo’burg airport she’s blindfolded and driven several hours to a remote encampment, where she finds a community of ….

Nothing is explained (it’s not that kind of science fiction story) but it has a strong sense of place, and character, and gives a glimpse into a strange, nomadic community, and more than a glimpse into the mind of Yona, struggling with finding her own place in the world, and otherwise in danger of drifting in and out of it herself.

A short (two page) take on what an agony aunt column might address in terms of human foibles and robots, chromosomal choices for babies, telecomms and uploading.

A first appearance in Asimovs by Broaddus and it’s an inventive piece – steampunk, and in a colonial setting, but from a Jamaican perspective. Dreadpunk. An’ ting.

The story opens with a bombardment from airships from the Albion Empire into fortifications on Jamaica. Desmond Coke is the protagonist, a servant working for a very wealthy couple. Broaddus creates a detailed socio-political backdrop to his story, an unflinching portrayal of the society, from his employers to the strutting Colonel Malcolm Juba, the head of the quasi-military government. There are those more recognisable as the stereotyped rastas of today, smoking herb (and a neat dig on their North American cousins). There’s a lot of detail to like throughout the story.

It kicks into a higher gear, as a simple story about Coke aiming to assassinate Juba is overtaken by events in Juba’s compound. Something is being created in the basement, following a visit by Lij Tafari Makonnen (that’ll test your knowledge!), and the tension racks up, then stops suddenly, halfway through the story, leavin’ I and I wanting more!

A strong issue, with some new names.
n.b. click here to browse reviews of Asimovs going back to 2000