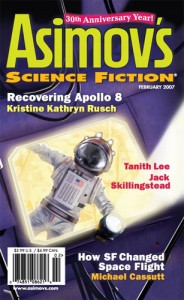 A countdown to a climax, with 10 episodes in the lives of an unlikely pair. Episode 10 sees young Tara playing marbles, her favourite being one blue/white orb which reminds her of Earth, and who finds out that she has brittle bones. The other is Chris Moser, a precocious 13-year old who launches a Cherrygale can, theoretically into orbit around the sun in the opposite direction to the Earth, and who is somewhat crestfallen when it doesn’t return to Earth in six month’s time.

Following their lives, we see Tara develop into a delicate introverted lesbian poet, and Chris become a very successful businessman/inventor, both with an eye on a big prize : she becoming an astronaut, he wanting to go further – around the sun.

Their paths eventually cross, in orbit, Tara as a NASA astronaut, Chris getting alongside in a ship of his own devising, planning to hijack some of their resources to begin his circumnavigation. However, it transpires that he can’t get enough fuel from them to carry a payload that includes his weight. But of course, Tara, is much lighter, and she likes her solitude….

There’s a twist in the tale, as Tara’s 12-month orbit around the sun is cut short, due to another Earth, in orbit directly opposite ours. Wilson does have the grace to acknowledge in the story that the evidence of the existence of such a planet should not have escaped the attention of our scientific community, and it just feels a little like the author struggling to find a dramatic conclusion to a story! But the two characters, complexed and three-dimensional, are handled well in a very much character-driven story, a first published one for Wilson.

One of those short stories that feels longer – not because it drags, but because it manages to portray a strong setting with vivid characters, and give a memorable plot and imagery in a short space of time. The rugged crew of a tramp steamer taken on a very strange cargo – not willingly, and the price they pay is a high one for all but one of them. As the ship pulls its icy cargo further north, that which is entombed within it is slowly revealed….

A very strong piece which follows a young man whose partner has left on a one-way journey to a far distant place, unable to wait for him to make up his mind as to whether he is able to let go of the past to face an unknown future. He is kicking his heels, missing her badly, but who is finally able to rid himself of the nano-crutch he has been using and to face up to himself and what lies beyond, as we follow him through a short-lived affair.

Charles Midwinter. A Portrait of the Artist.

Another first fiction sale, which just fails to succeed – primarily because it’s not entirely clear what its trying to achieve. A near future urban setting, with some good observation, and a bit of wry humour. There are some strange, squirrel-like creatures on the rooftops, and whilst they’re the most sfnal element, they’re too far in the background for a story where the main plotline isn’t anything special.

A young man, probably quite a bit out there on the autistic disorder spectrum, manages to brace himself to go to an evening self-help group session. Halfway through the session he realises that he’s in the wrong room, as it is a session for people who have been abducted by ufos, which is a bit of shame, as he has been hitting it off with an attractive woman in the group. But he is about to have an even closer encounter…

The longest story in the issue, and one I’m a bit ambivalent about. The story relates an alternate history where the crew of Apollo 8 died, evidently deciding to set themselves free in space to await their death, once their ship proved unable to return them to Earth. A billionaire scientist, obsessed with them since childhood, sets out on a lifetime’s search for the bodies, to return them to Earth, where they belong.

Plotwise there’s a big no-no in it towards the end : having spent decades on his search, and having found two of the bodies, the ageing scientist is en route to Mars when he sees the third body through a viewing port on the spaceship. I suppose in some stories you might just possible forgive this, but for whatever reason this didn’t feel like a story to allow that long-shot to work.

But something just nags about the alternate history element, and the use of Apollo 8, but I’m not sure why. The story is partly about the obsession to retrieve the bodies, but is also about the bravery of people in the space program, and it just feels a little manipulative. I can watch the film Apollo 13 time and time again, and it never fails to move, although it’s clear just how the director manipulates those emotions. But it somehow feels disrespectful to those who have died in various space programs over the years, to set a story around those who didn’t die. And it feels a little disrespectful to be giving the crew of Apollo 8 in this story a heroic bravado in death, when in reality the crew of that mission, did, as do any astronauts, display bravery of a kind which most of us would be unable to contemplate. The Apollo 8 mission, according to Wikipedia, was put together in four months, and used a Saturn rocket only tried on two previous occasions.

If I was into psychology, I’d been suggesting that Rusch (and others looking back on the early space programs) was using the Apollo 8 crew and mission as a metaphor for America in the 1960s, and the failure to live up to Kennedy’s clarion call to put a man on the moon, and the mission to recover the bodies is really an attempt to regain possession of those earlier days of exploration.

Is it me, or is there altogether too much backwards-looking, alternate history/retro in a lot of SF these days?