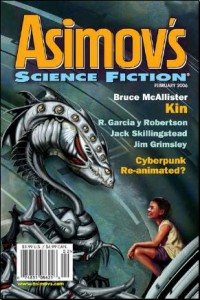 Jonathan Sherwood. Under the Graying Sea.

The largest protospike engine in history propels Tessa and Lorand towards the stars, in a spacecraft – or, more accurately, a Concussion Vehicle, for in order to make use of the wormhole that is to be humanity’s pathway to the stars, the crew have to stand up to tremendous g-forces, and to do so requires a great deal of genetic tampering. Their ship, a regular monthly launching for some decades, appears to be pushing the envelope with respect to the amount of G to which they are subject to, and when it goes way past what has ever happened in the past, Tessa realises something has gone wrong.

Coming round, at their destination, but with their bodies badly beat up, Lorand the more so, Tessa is faced with the usual Analog conundrum – how to stay alive, how to identify the problem, and how to resolve it and to return to Earth. Can she use her scientific expertise and her gutsiness to rise to this challenge?

But this isn’t Analog, and so the answer isn’t ‘You Betcha’.

Maybe a tad too much tech description at times, but Sherwood handles the story well, building on the present dilemma through Tessa’s memories of seeing the spike in action as a child. But damn those cold equations….

Glinda is a woman of a certain age, but her change of life is somewhat more complex than is currently the norm. She is crowing a tail, and taking on some feline characteristics, as are many of her contemporaries. Not cutesy puddy tat characteristics, but Big Cat ones. She leaves behind the office politics, as the call of the jungle is too much to resist.

Some neatly observed cameos, but as a whole the story as such doesn’t go perhaps as far as it could.

Jack Skillingstead. Are You There.

A dark, bleak near future, seen through the eyes of a cop who has split from his wife – not exactly split, but rather divided the apartment in two so that they can retain their housing rights as a couple. He has a pal on the net, and he has to come to terms with his resistance to commitment at the same time as hunting down a serial killer psycho, whom his own inaction nearly proved fatal to his cop partner. If you think his life is bleak though, spare a thought for the long dead mother of the psycho, who uploaded herself into a pocket-sized AI, to keep in touch with her son. Norman Bates goes hi-tech!

A conservationist takes out a group of volunteers to clear an infestation of a weed which the visiting Hastillians have brought to Earth. The group inclue anti-Hastillians, and also one of the Hastillians, so there is scope for both side of the argument over their presence and their plans for Earth. It transpires that the Hastillian weed is just that – a recreational drug for the aliens to mellow out with, and the ‘volunteer’ Hastillian is somewhat reluctant to see his stash cleared away.

OK as far as it goes, but missing that extra depth or dimension to rise above the average.

Subdued horror story in which we find out that one man’s experience of coming back from the dead is not necessarily such a good thing. Having been revived after two years in cold storage, Roger finds the whole experience of being alive strangely downbeat. His body is fine, his brain is working, but the get up and go has clearly got up and gone. Those scientists who are pleased that he has revived strive to find out why others in his cohort did not. After some time they decide to try again, and Roger is poisoned, and revived once more. The experiments go on for some time, with Roger quite unmoved as to his fate. However, he finally decides to seek a more permanent way out.

One quibble I would have as the author, is directly following the story with a trite poem/piece of doggerel called ‘It’s Not Easy Being Dead’ which features Kermit the Frog.

A young boy does not want his mother’s pregnancy to be terminated, which the rules of their colony dictate. His solution : to call upon an alien Antalou to carry out a hit on the bureaucrat working on the case. The Antalou are fearsome killers, but they charge much more than the boy can afford to pay. However, he has researched the Antalou well, as is able to use the ties of kinship, strong in the Antalou, to get the alien on his side.

The boy’s wishes are granted, although the Antalou has only to threaten the civil servant, and the link between the boy and the Antalou prove to be strong ones.

Robertson returns to the future of ‘Oxygen Rising’ (Asimovs Feb 2005), which was notable for its ‘Church of Elvis’ and photo-sapiens.

Here a young woman, a sex slave to a group of Space Pirates since her early teens, is brought onto a spaceship with a couple of young children who are there as a human shield, just prior to what promises to be a final confrontation with the forces of law and order.

However, she and the two human shield children are able to pull a fast one on the pirate (hidden weapon) and they are saved.

If your bent leans towards Star Trek/Star Wars, the adventures of a chiffon-clad, leather-booted heroine in deadly danger might appeal. For me the total absence of any evident psychological trauma following from witnessing multiple murder, near death, kidnap, sexual slavery and mind-control, are somewhat noticeable.

An excellent issue, with Sherwood, Skillingstead and McAllister providing my kind of SF.