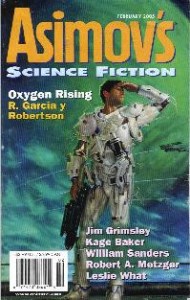 John Grimsley. The 120 Hours of Sodom.

A very strong story from Grimsley, one in his ‘Hormling’ series (‘Perfect Pilgrim’ in Asimovs Feb 2003, ‘Getting the News’ Asimovs March 2002 both impressed me).

Here he looks at a far future, decadent humanity, with those long-lived humans who have wealth able to satisfy their every whim. Unfortunately, for those without wealth, life is not as easy (nor as long). Figg and Sade are two who into the former category, Figg memorably enchanced by a robotic spider which interfaces with, and sits in, his cranium. Sade has taken his name from the 18th Century French aristo, the Marquis de Sade, and has a similar penchant for debauchery. The opening scene in which the pair partake of a leisurely lunch in a restaurant whose focal point in plant which is slowly, very slowly, devouring a slave girl who is symbiotically attached to it, is chilling.

The birthday party is a truly debauched affair, and Sade revels in the media attention in his role of host, suddenly unveiling the young brother of the girl in the final moments of her life.

However, he has miscalculated, and somewhere from deep in his 300-year old soul, Figg begins to feel long-unused emotions, and he swiftly instigates an arachnid justice on his erstwhile friend.

Another dark story, of nightmarish quality, in which Earth is being attacked by strange beings from another dimension?, who appear near airports and attack planes whilst at low altitude – reaching into those planes and removing hapless crew and passengers to …. somewhere.

The protagonists are the pilots whose job it is to fly small aircraft to defend the passenger planes on takeoff and landing, the times at which they are vulnerable. But the strange power of the angel-like beings to affect those tasked with destroying them is demonstrated to chilling effect when a new recruit is entranced to the point of not being able to pull the trigger.

An olde-fashioned horror story, in which a woman who reclaims her dead husband from the clutches of the sea, to live a half-life in her cottage, brings upon the community the wrath of that other old lady, the lady of the sea.

A story whose length is really too short to do itself justice. When Immigration and Citizenship civil servants threaten a young asian fellow pupil, young Sam’s role as a time-jumping firefighter comes to fore as he, and future Sams, attempt to help the friend, and to protect Sam himself.

A very clever piece of hard SF writing. We are introduced to a character in a very strange, Groundhog Day situation – repeatedly visiting his old family home, seeing Bobby digging a hole in the garden. Each visit enables him, and the reader, to begin to understand what is happening – he is trying to fix a very big problem.

Leslie What. Dead Men on Vacation.

A Holocaust survivor finds that even after death he is able to prevent some of the evil consequences of the Holocaust impinging on relatives ofm those whose lives were lost.

Nice to see some SF from this author! The genetic mix includes homo sapiens, homo smilodon and photo sapiens.

Derek is the homo sapiens, using his talents as a negotiator to make the best out of a very bad situation – on a planet whose ownership has been argued over, both humans and Gekkos (another race) have been guilty of war crimes.

Our human has never been on Earth, and is living amongst Greenies (photo sapiens), who use photosynthesis as a key element of their biological processes. They are otherwise human, as his relationship with a Greenie girl clearly demonstrates.

The first half of the story features a tense stand-off, followed by this exploration of human/Greenie relationships. The second half somewhat fazed me, as Derek comes across female humans who are from the Church of Elvis, and who see him as their King (uh-huh).

Top quality SF from Grimsley, Sanders, Vick, Metzger and RGyR. Baker and Vick provide a contrast of the type that goes down well with those who vote for the Nebulas in particular.