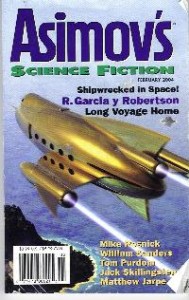 Mike Resnick. Travels with My Cats.

Resnick furnishes a story the like of which you would normally expect to see in F&SF, or in other more mainstream sources. A young boy’s finds a limited edition travel book written some time back by a Miss Priscilla Wallace, whose prose descriptions of her travels enraptures the boy. Some decades later, a rather lonely middle-aged man, he is drawn to dig out this old treasure, and is once again transported. Not only is he transported, but the author, whom he has been researching, is transported to him. Having found something special in his life, it is cruelly snatched away when his copy of the book is destroyed, resulting in his setting out on the road to find another copy of the book in order to be reunited with Miss Priscilla Wallace.

Purdom has more fun with Joe Baske (previosly in ‘Romance with Phobic Variations’ in Asimovs Feb 2001), who fancies himself a spiritual descendant of Casanova, and whose pursuit of the fairer sex sees him heading out to the Kuiper Belt with Ganmei, whose mix of beauty and boldness has entranced him.

However, the scientific trip comes a cropper when they are attached by a villain straight out of Central Casting (actually, the kind of villain who Central Casting would reject and who would end up on the books of Hams’r’Us).

Their attacker is pudgy chap with a golden robe and red boots, and a chip on the shoulder of a size developed no doubt to overcome a lack of development in other (ahem) regions, but whose sexual depredations take Ganmei to the brink. However, the couple are saved in the nick of time.

I have to admit I found it a bit heavy going.

Sanders has furnished a number of excellent short stories, including several featuring notably cutting perspectives on race and prejudice. This story doesn’t quite do it for me. The fundamental premise, that there all any number of hominid species now integrated into society – races previously thought as mythological, such as Bigfoot and the equivalent in other countries – is one that perhaps could be used to humorous effect, but is just a bit too silly to have a sharp edge. Furthermore, the story of a light aircraft pilot who is a Bigfoot, who finds out that humans he has ferried across to a deserted lake have lycanthropic tendencies, isn’t a strong one.

First Contact is compromised by the fact that those best placed to communicate with the visitors are humans who have chosen to undergo drastic brain surgery that removes their ability to commnicate verbally. This surgery (somewhat unbelievably) gives them others means of communicating and empathising with the aliens. A little contrived for my liking.

A peaceful drink of beer at a bar is shattered by a terrorist bomb explosion. Lucky to survive, the protagonist finds (it is not clear how) that he can rewind time and make a minor change in his actions to save the life of a nearby drinker. But whilst she will live, he will suffer a long term disability. Does he make the choice?

I started this story with high hopes, liking many of Robertson’s previous stories. However, a predecessor to this story(‘Ring Rats’ April 2002) was, I noted at the time ‘not one of RGyR’s more thoughtful pieces’, and this story feels like it was written at speed. It does go on (and on and on) and has some quite uncharacteristic silliness with cat(Kzin)-like genmod humans with insufferably cute kitten-children in it.