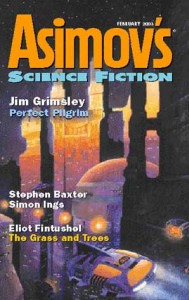 Another in the author’s Xeelee sequence.

A human warship, human tech on the outside of a space-faring Spline, comes off worse in an encounter with the Xeelee.

The remnants of the crew have no choice but to burrow deep into the living creature that had recently served as their vessel. The collection of individuals, including the Marine Mari, an Academician, a pair of Cadre Siblings, and other crewmembers, struggle in the alien environment. However, even as their nubmers of gradually depleted, Mari learns about herself, about what it is to be human, and, particularly important for the story sequence, of the Spline home planet.

Ings follows up his Dec 2002 Asimov’s story (‘The Convert’) with another stylish story.

The nature of perception, and how it informs ‘reality’ is the theme, with the protagonist, Saul, undergoing experimental surgery which enables him to ‘see’ sounds, and ‘smelling’ sounds. We are with Saul as he has his world-view changed, and then returned to normal, leaving him achingly alone.

I’m not familiar with Grimsley’s ‘Hormling’ series, which may have had some affect on my enjoyment of this story.

A young man, Ess, has left home, journeying upon a pilgrimage. On the planet Sha-Nal he is greeted by a non-gendered Middlewam, who is to be his guide, and for whom he feels more than friendship. It transpires that Ess may having within his sould a fragment of the deity, known as Hanson, and Ess has a choice to make. Should he give up his corporeal life in order to be closer to godhood.

Grimsley takes an at times poetic approach, and gives the story a sense of history and depth that is often not present in SF. The story feels like part of a series, with a few unexplained references, and the nature of the deity suggesting an appearance in at least one other story.

Somewhat more straightforward fayre. A retired thrill-seeking ‘extreme sports’ dude is tempted out of retirement for one last time. Ah, but can there ever be one last time with someone like that?

Karen Traviss. Suitable for the Orient.

An MD supporting a colony also tends to the indigenous population of monkey-like creatures. The colony has had little problem with the resident population, but that changes when one of the local youths goes hunting.

The humans are hugely outnumbered, and have a choice to make – hand over the guilty party to the aliens, or face their wrath.

The youth is handed over, but the retribution handed out is not as violent as anticipated. The MD and his fellow colonists have food for thought.

Eliot Fintushel. The Grass and the Trees.

A return to the characters from Milo and Sylvie (Asimovs, March 2000 and Dozois’ 18th), and a story which I would put forward for annual Dozoisification.

If I was of a more scientific bent I would probably analyse exactly what it is that makes a story a ‘wowza’ in my opinion, but I think that would spoil the fun. Certainly one element, which Fintushel has in spades, is letting the story develop without spelling everything out for the reader. This is of course quite different to Analog, for example, where authors evidently have to show their underpinning scientific paradigms in full.

Suffice to say, we have here a rich, suspenseful story, populated with fully fleshed (and often unlikeable) characters. Shape-shifting (with some degree of underpinning science) is the key element, and young Milo is being hunted by his sister.

A particularly strong issue, with Bateman/Traviss providing relatively bog-standard stories, and with Baxter (less so than the others), Ings, Grimsley and Fintushel providing a high quality