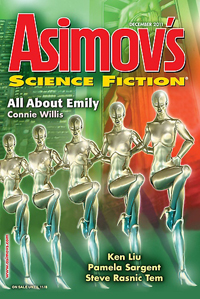 A thriller (up to a point) in deep space, that starts with an Analog-y feel to it. Bari, a junior crewmember on an academic research mission studying some intriguing, migrating space creatures. The dialog is a bit creaky, with the scientific lead giving forth in the front of the crew who clearly know why they are there : “No one has ever come this close to understanding Rooan communication before. With my system, and the extended, close-up sampling we’ll be taking today, we are making history!” (Palmer does recognise this in the story a page later!)

It turns out though that the junior crewmember is more than she appears, and this is where the story really suffers, as the story progresses with everything withheld from the reader, as Bari overpowers the crew, and sets off an altogether different mission. The main issue is that she has a whole heap of extremely advanced tech, which puts the odds into her favour and makes for not much tension, as you just know she is going to be able to pull something out of the hat (or the spacesuit) to help her in whatever predicament she faces.

A young girl with an autistic brother, and a scientist father and housewife mother struggling with to infant twins, and too little money, finds out that she has to accept that she will lose something precious for the greater good. The story zips along quickly, and doesn’t really go anywhere different than has been covered quite a lot, and having made the sacrifice it’s pretty much a happy ever after in the timeline she ends up.

A bit of festive fun across one and a half pages, with one of my favourite pieces of closing dialogue in some time. Unfortunately, I was a bit distracted by the half page of the two page spread taken up by a cartoon which a) wasn’t particularly funny b) appeared to be drawn by someone with only a cursory knowledge of human anatomy and physiology.

A short, cautionary tale, looking at an all-too-plausible (un/desirable?) future in which the whole wealth of human knowledge is at your fingertips/physical artefacts such as books and magazines are consigned to the dustbin of history.

An effective story, which gets into the head of a young autistic man, as we find out exactly what has brought him to the attention of the authorities. There’s a lot going on inside his head, and his domestic situation doesn’t help matters, and Liu balances this with a lot of pure mathematics (diagrams supplied) which means about as much to me as subtle nonverbal communications are to people with an autistic spectrum disorder!

Connie Willis. All About Emily.

A novella with a strong retro vibe to it, telling the story of a Broadway actress in the near future who befriends someone who dreams of a life on the stage. The style of the writing is very 1950s, as is the central conceit (an inventor who has created a female robot indistinguishable from a real human).

Steinmetz makes a third trip to the well of inspiration and draws out a tale relating to computer gaming. Groundhog Day at FFWD, as a young woman tries (and tries, and tries, and tries) to extricate her brother from the hands of the occupying forces – making incremental progress each time the scenario is rebooted. By using some clever ingenuity, and a heap of XBox kit, it’s much more than a game. Much deadlier.

Not a classic issue, even Connie Willis failed to tickle my fancy this issue.