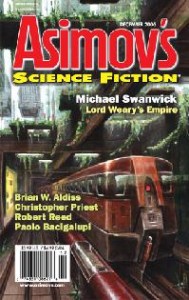 Bacigalupi’s ‘The Calorie Man’ appeared in Fantasy & Science Fiction’s Oct/Nov 2005 volume, and was widely, and rightly applauded. It was one of the strongest stories of the year for my money, from a new author whose initial output has been notable.

This story is set in the milieu of ‘The Calorie Man’, and if not quite up to the heights of the original story, that’s more a reflection of just how good ‘The Calorie Man’ was. The future Bacigalupi posits is a relatively near future Earth which has suffered a lot of societal changes wreaked by multinational agribusinesses and bio-engineered plagues ravaging food crops.

This story opens claustrophobically and intensely, with a nightmare of machetes and blood waking Tranh, who has been sleeping with hundreds of other Chinese, refugees from Malay, in a rundown high-rise in Bangkok. Previously a wealthy businessman in Malay, he had not been quick enough to see the politics and the nationalism that would lead to the rivers of blood which have washed him and his fellow Chinese to such a state of depredation as refugees in yet another country. With only a thin suit, the only reminder of his past he has held onto, to mark him from the thousands like him who are looking for a step on the ladder, he has only his skills and knowledge to help him avoid starvation.

He has to face not only his compatriots in the same situation he is in, but an ex-employee who has managed to do well for himself, and who has obtained the beyond-price Yellow Card which marks him out as not a refugee, but a bona fide citizen of Thailand.

The story follows Tranh through a failed attempt to gain employment to a chance further encounter with his ex-employee, via a scarily dark clockwork prostitute. Bacigalupi gets under Tranh’s skin throughout, and you can feel his hunger, and desperation and follow his mental turmoil as he struggles to avoid drowning in the sea of starving humanity.

Following hard on the heels of ‘Pop Squad’ (F&SF Oct/Nov 2006), a brace of stories of top quality.

A story of only half a dozen pages, put Reed packs a lot in, as he often does, and provides a glimpse of a slice of life in a strange setting that you just want to know more about. Plotwise there’s not a whole lost to report, other than a young boy and his family turn up to watch a local parade to mark the Winter Solstice, and the boy gets closer to one of his heroes than he could ever have imagined. But the setting is one of those that is quite like contemporary USA, but different in many respects. The cast of characters is a vivid one, with lots of different races and variants on human norms, and I for one continue to marvel at the sparkiness of Reed’s imagination which produces more in half a dozen pages than a lot of writers manage at much longer length.

An author new to Asimovs. Forest sets up a moral dilemma, probably of the type which as a mother and elementary-school principal she will have come across, and which many of us as parents will have faced : to what extent do your stand on your ethical/moral principles when it comes to your children’s welfare? Whilst for most of us it’s a case of “do we stay in this neighbourhood and send our children to the local school, or move house to get them into a ‘better’ school” (we did the former and it appears to have worked out OK!). In this story the dilemma is a much greater one, as dwindling supplies of serum which can combat a lethal virus has to be rationed to the very young and very weak, and the person dispensing the serum funds that her daughter has contracted the virus but is above the age limit for getting the serum.

Trine makes the decision, which can subsequently be rationalised on the basis that when a new supply of serum arrived there was still other serum left after the dose she gave to her daughter, but Trine cannot take this as comfort.

The main criticism for me is that the story does little than sets up the ethical conundrum, and show its resoluation. It’s perfectly fine in the way it does that, but a more established writer would have added length and depth to the story to give it greater weight (as Bacigalupi above).

A very colicky satire on life, the universe and everything from Grand Master Aldiss. Two stories are intertwined : that of a two-man expedition to Ganymede, which becomes a one-man expedition due to the very mixed up thought processes of one of them; and that of presidential assassin, or rather the guy fitted up for the assassination of the president. The lunatics have taken over the asylum in a way which makes you pine for the simpler times such as those in Dr Strangelove.

An effective short piece from another British SF eminence-grise. Marcus Birch’s final moments appear to be destined to be spent falling off an Underground platform under the wheels of an approaching tube train. But these moments are s-t-r-e-t-c-h-e-d out as he ponders the nature of this death, and why his last thoughts should be about driving on a motorway in Belgium, something he did only once many years ago….

But on his long journey in front of the train, set against the classical music on his iPod, the method in this madness gradually appears….

Said golden record being the one on Voyager 2, which Andrew Pitt of the Houston Spaceflight Museum is chasing down in the Kuiper Belt. World Polity registered, he manages to claim this salvage against a rival, who represents the ‘government’ of The United States in Exile, and who want this back as a testament to their glory days. There is a subsequent legal battle of the disk, and an intervention by consipiracy theorists who believe in a secret track on the record, in a neat tale the is the more successful through the interweaving of a couple of strands of plot and having some dramatic space action.

I was frustrated to see that this story was at the end of the issue (gentle reader, I do read from first page to last rather than cherry pick my likely favourites first), as it continues the story of young Will, who last we (or at least, last I) heard of, in ‘The Word That Sings the Scythe’ (Asimov’s Oct/Nov 2004), quite memorably witnessed a slugfest between two collossi, having firstly been introduced in ‘King Dragon’ (The Dragon Quintet, SFBC, and collected Dozois 21st). These stories were in the same setting of his 1993 novel ‘The Iron Dragon’s Daughter’, which I duly took the time out to read, and which impressed.

This story has a very claustrophobic feel, set as it is in the subway system under a city in his faerie-punk world. Will finds himself in the employ of Lord Weary, who leads a large band of very raggle-taggle misfits in the dark passageways. When fratboys from the surface start forays into their territory, Lord Weary, with Will’s help, plans to rebuff them.

For me the story faded towards the end, feeling slightly more routine than is normal with Swanwick, with the twist in the tail (it was most of it a ‘dream’) not satisfying. Overall it just felt, in comparison to the predecessor stories, to lack that special bit of magicke.

Enough quality in here for a double-issue!