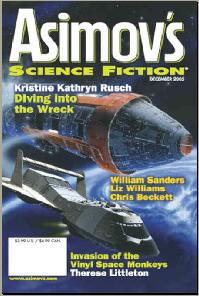 Reviewed : Palm Doc version on a Tapwave Zodiac.
The Tapwave Zodiac ceased production earlier this year, and can now be bought for a slightly more accessible price on eBay than was the case through retail. The Palm OS PDA not only handles ebooks well, but also plays mp3s, videos, runs Duke Nukem 3D, Doom I and II, Quake (!), and also Sinclair Spectrum games. So why would you buy a PSP?

A strong start to the issue. An anomalous space wreck is the setting – a very old Earth spaceship is found in a remote part of the universe which it has no right to be in : it is far too old to have had the motive power to get this far from Earth. A crew of six head for the wreck, looking for salvage rights, but find much, much more. Rusch takes the dangers inherent in deep sea diving and memorably puts them into the deep dark vacuum of space, making the exploration of the hulk a much more complicated issue than tends to be the case in the SF.

The crew are individually rounded, and tension builds as the exact extent (if not the nature) of the danger they face becomes clear.

Beckett’s ‘Picadilly Circus’ (Interzone #198, May/June 2005) impressed me hugely, and here he returns to the same setting – a near future London in which those (the majority) who have uploaded, co-exist who this who remain ‘physical’, as their consensual reality is shared (ie the virtuals ‘virtual London’ is overlaid onto the ‘real’ London and those who choose so to do can see both realities simultaneously.

The story, for those who have read the aforementioned Interzone piece is somewhat less effective as the story rather serves simply to enable Beckett to make crystal clear exactly how it all works, to the extent of characters very helpfully (if you are having trouble understanding the basic premise) explaining to a child just how it all works and the implications for all concerned.

James Maxey. To the East, a Bright Star.

With a calamitous meteor strike finally about to take place, a man heads off to face the imminent catastrophe armed with a final hit of heroin, but shares it with a woman whose final weeks have been that of a sex slave in New Orleans. I’m not entirely sure what Maxey was trying to say with the story, which is about as downbeat as you can get!

Set in the same setting as Williams 2004 novel ‘Banner of Souls’. Not being familiar with that, the story as a singleton is OK as far as it goes, describing a woman charged with looking after a young girl who has the misfortune to have the darker side of the nature of another visited upon her. Does she have a chance to overcome this? The story ends posing this question, which is the point at which I was expecting it to kick off into a longer stretch.

A good end to the issue, as we see a woman struggling with alienation in her role as wife and mother. Not due to the usual mundane ‘Desperate Housewive’ issues, but rather as she is back from a far future jaunt defending humanity from threatening forces. We follow her struggles in re-attuning herself to those routines, made banal due to her offworld farfuture differentdimension travelling, until she is called once again…

For me the Rusch and Kilby are the pick of the issue. Sanders/Maxey/Williams are OK without breaking new ground, and Beckett’s story isn’t as impactful as the earlier story in that milieu.