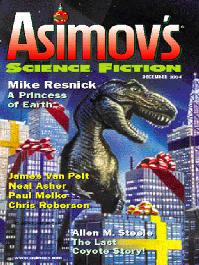 A short fantastical piece in which the arrival of a Christmas Tree is a cause for celebration, despite the fact that it is a very different kind of tree to those we know and love.

One of the standout stories in Lou Anders’ collection ‘Live Without a Net’ [reviewed here] was Melko’s ‘Singletons in Love’ and here he returns to the same milieu : a future in which humans live as a ‘pod’ – a half dozen or so living almost as a single person, sharing thoughts and feelings.

Strom is slightly out of the norm – he isn’t as intellectually strong as the other members of his pod, but he makes up for that with his strength. They are training to be a starship pilot, and this involves being set down on a mountainside for a bit of wilderness survival training. However, things go badly wrong and Strom is faced with the ultimate horror : the fear of losing his pod partners and becoming a Singleton.

Melko gets into the mindset of the character well, as he strives to come to terms with what his future appears to hold.

A return to the festive theme, as a comet which makes a visit to Earth only rarely, is a mute witness to humanity falling, and an inspiration for it rising again.

The concluding part of the ‘Coyote Rising’ story cycle concludes with some loose ends tied up, and the planet ‘..land of the free, the home of the brave’. I’d imagine you’re either going find a sentimental tear in the corner of your eye with this ending, or a dread at the prospect of this being the future for humanity.

Mike Resnick. A Princess of Earth.

Resnick comes up trumps with a wintry setting of a story which is an sfnal echoes of ‘Miracle on 34th Street’ and ‘It’s a Wonderful Life’.

Shattered by the death of his wife, a widower finds his solitude broken by the arrival of a naked man in his snowswept garden. The tale told by the stranger is unbelievable : he claims to be John Carter of Virginia, plucked in an untimely fashion from Barsoom. The ravings of a madman? But, as is ever the case in these stories, he has a plausability about him, and when he disappears, the widower is left to ponder whether true love has called John Carter back to his Dejah Thoris. And if so, can Barsoom offer the widower a wintry miracle and be reunited with his own lost love?

Aaron Schutz. Being with Jimmy.

Unsettling story in which Alphie has been living a hermit-like life on an island for several years. He is on the island for his ‘talent’ of seeing through the eyes of other humans. His routines are thrown by the arrival of a similarly afflicted teen and a younger child.

In a setting in which it is China who has global dominance, a young woman of the Court finds herself attracted to a stranger. He has tales to tell, and she finds herself aiding him in bringing the tales of oppression to a wider audience, even though she pays the highest price for this.

A young human with a terminal illness is disappointed to find the technically far superior alien race now on Earth have no answer to his cancer. However, another alien race, who initially appear to be offering to hasten his demise have in fact a much more positive role to play in his future.

A truck driver, a spacecraft pilot, and a suicidal girl find their individual struggles echo those of each other. Not the strongest of Van Pelt’s writing.

An interesting take on humanity reduced to a more subsistence level of existence due to the failure of technology. Whilst the adults react with joy at the return of the power which will enable them to go back to the old ways, a young girl finds the thought of leaving behind the ways which are her ways, doing things with your hands, is not a happy one.